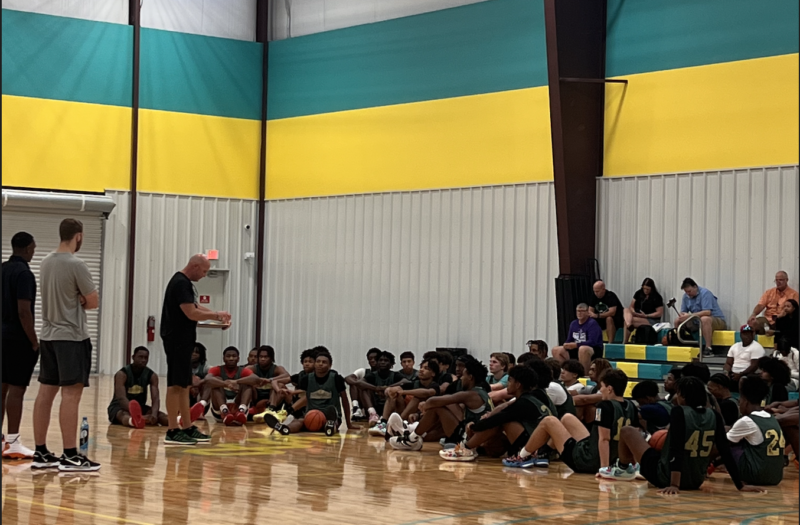 UnCommon Basketball (UC) is a program created by 20 year college coach Russ Vanlandingham, with the intention of promoting under seen prospects by projecting levels and fits at the next level. With his vast experience of the college game Coach “V” runs a tight camp with no gimmicks. No one cares about your rankings here. You have to out work and beat out the guy next to you. Check out my analysis from some of the top performers from the event!

Jerrell is a promising young prospect who has showed off his high basketball IQ, ability to score from the perimeter and create at a very high level for his age. Barron was easily one of the top prospects in the gym through the way he calmly and smoothly scored from the outside off the bounce, and found his teammates with pinpoint passes right on time. I was very impressed with his shooting mechanics and ability to score from the perimeter, calmly shooting over the top of his opponents. He has a soft release, allowing him to put great touch on his shot from anywhere on the court. He is a deadly scorer in the mid-range, and knows how to get to his spots on limited dribbles where he is the most comfortable.

Defensively, his long frame allows him to defend multiple positions, and can already lock up positions 1-3 with ease. He calmly slides his feet to stay with his opponents and pounces at the ball at just the right time to poke the ball free or force his opponent into a mistake. I was very impressed by his basketball IQ on this side of the floor at such a young age. He did not get much playing time at Atascocita last year, but they graduated upwards of 9 seniors who contributed for them, so Barron should walk right in and begin producing this year. I have had multiple coaches and former players rave about him and his development for his age.

Almany is an aggressive guard/ wing player who thrives at getting downhill and finishing in the paint off the bounce. I was very impressed by his natural ability to slash and cut with and without the basketball. He always goes up strong to finish over his defenders, and uses his frame to absorb contact on his way up. He showed an ability to play out of the high post, making good decisions to find cutting teammates, but also with a live dribble, attacking closeouts with pace and slipping past his opponents. He is confident in his shot from the mid-range, and loves getting to his spots. He has a high release point, and really leaps on his jumpers allowing him to shoot over more defenders.

An aspect that I loved was how hard he competed on both ends of the floor, really left it all on the hardwood as he hustled to loose balls and was eager to defend other guards and wings. Diaby plays with enough intensity and tenacity to defend positions 1-3 at the next level, and is likely willing to compete against stronger 3s and 4s! I was very impressed with how well he played defensively, showing off his awareness and intensity every time the ball was rolled out.

Glenn is a dynamic athlete who excels at turning defense into offense and finishing on the fast break.He has a real nose for the ball, and is great at timing up steals by playing the passing lanes. I was very impressed by how well he was able to handle the ball in the open court, and get to the spots in which he needed to be successful. He never seemed to over dribble, and every time he put the ball on the floor it was to get downhill or set up a teammate by filling in an open space. He was great at getting into his spots in the paint, hitting tough runners and floaters in the paint. He showed an ability to knock down shots across all three levels of the floor off the bounce, and really impressed me during his time on the court.Without the ball, Bishop cut backdoor to catch his defender slipping and was able to get lots of easy opportunities by playing in his defender’s blind spot. He ran the floor hard, and let his teammates hit him with timely passes to set himself up.

Javon is an intense player who really makes his mark on the defensive end of the court, getting under his opponent’s skin and forcing them to make mistakes. His tenacity on that end of the floor will make him a real weapon at the next level, and his switch-ability will be a coveted asset that college coaches will be fighting each other to get their hands on! There are lots of things in his game that still need work, but he has plenty of time to fix these little things in his game. He needs continued development with his handle and ability to keep his head up when manipulating the defense with a live dribble. There were a few instances where he could have made a pass to a teammate, but he did not see them. He also does not have the tightest shooting mechanics, forcing his shot to go off target. He makes his mark defensively, and is already a college level guard/ wing defender.