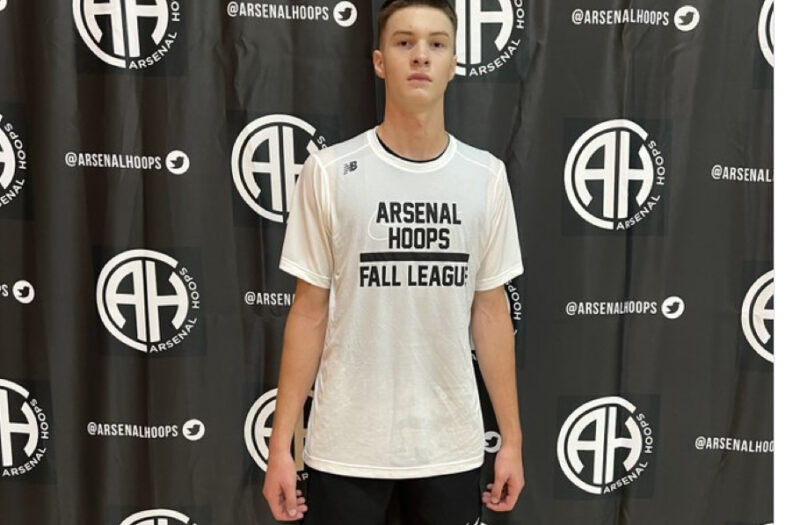 Prep Hoops Missouri began its tour of the Fall League circuit by paying a visit to the Arsenal Hoops Fall League, which is held in Wentzville.

Here is a look at some New Names of players who caught my eye on Saturday’s first day.

Nolan Frey (Wentzville Liberty): A 6’5″ 2024 forward who had an excellent opening game with 24 points. He has good length and athleticism with a solid skill set. Early in the game, he was eating from long distance on the pick and pop with a feathery shooting touch. He had some nice takes to the basket and he crashed the offensive boards hard for putbacks in the second half. I really liked what I saw from him as this was my first time watching him.

Cole Kirkpatrick (Chaminade): A 5’10” 2025 guard who scored 15 points and was very solid on the offensive end. He scored on some impressive drives to the basket as he made a nice scoop shot in traffic and he also went high off the glass with the runner. He also warmed up from long distance as he knocked down three 3-pointers. He picked his spots on offense and he was very good when he was assertive.

Brenton Shirk (Windsor): A 6’0″ 2024 guard who scored 22 points in his opening game of the league. He was constantly attacking the basket and he scored well through contact. He had a nice spin move in the name to get by defenders for the bucket. His constant moving led to a few backdoor layups and he also hit the open 3-pointer.

Zach Urban (Fort Zumwalt West): A 6’3″ 2024 wing player who scored 16 points while playing a very solid all-around game. He moved well without the ball to score on cuts and he had a pair of nice baseline takes to the basket. He made good use of ball fakes to set up his drives to the basket. He also was very good at hitting the Corner 3.

Jacob Aydelott (Timberland): A 6’1″ 2025 guard who was in attack mode from the opening tip to the final buzzer, in which he scored to give his team a victory in overtime. He was driving to the basket and also posting up against smaller defenders to get buckets. He was very aggressive and fearless as he constantly probed the defense for openings in which to drive.

Andrew Badra (Wentzville Liberty): A 6’3″ 2025 forward scored a very workmanlike 22 points in his opening game of the league. He was always around the basket with effective and scoring while taking all of the contact. He scored on some impressive drives and he just stayed very active with his effort. He also added a couple of step-back 3-pointers to compliment his inside game.

Eron Pordos (Fort Zumwalt South): A 6’1″ 2024 wing who was one of the most active players that I watched during Saturday’s first day. He seemed to be all over the place with his athleticism and high motor. He was a big factor on the offensive boards and he was constantly slashing to the basket on offense and hitting the passing lanes on defense. His consistent effort enabled him to make big plays at both ends throughout the game.