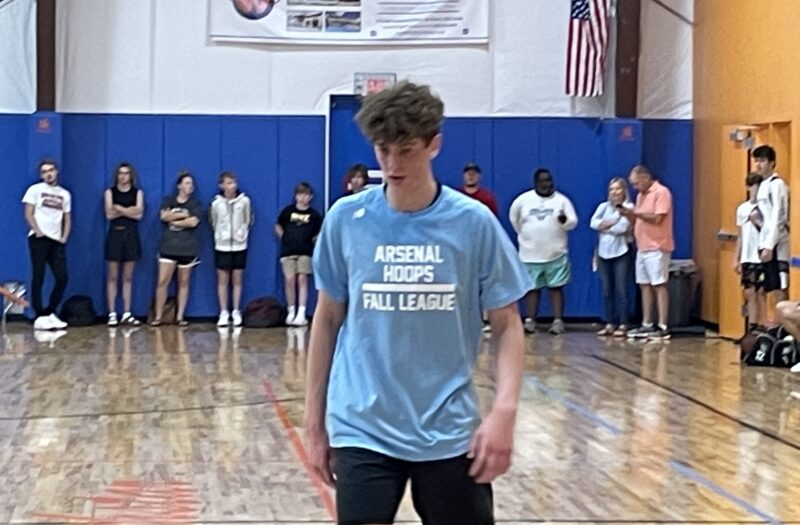 Prep Hoops Missouri takes a look at some of the top Class of 2025 and 2026 forwards from last Saturday’s coverage at the Arsenal Hoops Fall League in Wentzville.

Eli Fauss (Clayton): The 6’4″ forward was one of the most impressive front court players I watched during the day as he scored 27 points in the opening game. He has a versatile offensive skill set which included an excellent low-post game. His jump hook in the lane was a big weapon for him on offense as was the turnaround jumper. He effectively backed down defenders into the lane. He was also hitting open cutters with his passing. He could also step out and hit the 3-pointer off the catch.

Eddie Smajic (Vianney): The talented 6’5″ 2026 small forward showcased his all-around skill level as he scored 30 points in the opening game of the league. He has a good feel for the game as he played the game at his own pace. He can use his size and strength to take smaller players inside to score. He was knocking down 3-pointers off the catch while also being able to create his shot off the dribble. He displayed some impressive bounce late in the game with a pair of transition dunks. He is one of the state’s top incoming freshmen.

Andrew Bandra (Wentzville Liberty): The 6’3″ forward scored 22 points in the opening game and he did it in a very workmanlike manner. He was always around the basket as he was active as a scorer and rebounder. He did a nice job of scoring through the contact. He also scored on some impressive drives to the basket while also adding a couple of step-back 3-pointers.

Luke Nissenholtz (Clayton): A 6’3″ forward who played a very solid game with good fundamentals and footwork around the basket. He was very effective on the drive as he was able to execute a nice spin move in the lane on several occasions to get a bucket. He passes the ball well and he can hit the short jumper.

Brady Schuettpelz (Webster Groves): A 6’4″ forward who was very aggressive in attacking the basket at every opportunity he could. He was a very effective scorer around the basket with both hands. He was very deliberate when he was making his moves to the basket and he also made some nice interior passes. He also knocked down the Corner 3-pointer.

Clay Bowman (Fort Zumwalt West): A 6’5″ forward who is long and lean with the ability to operate while facing the basket. He did a nice job catching the ball and knocking down shots from the high post. He also stepped out and hit a 3-pointer. He was very active around the basket with his length and mobility. I look forward to seeing him develop in the future.