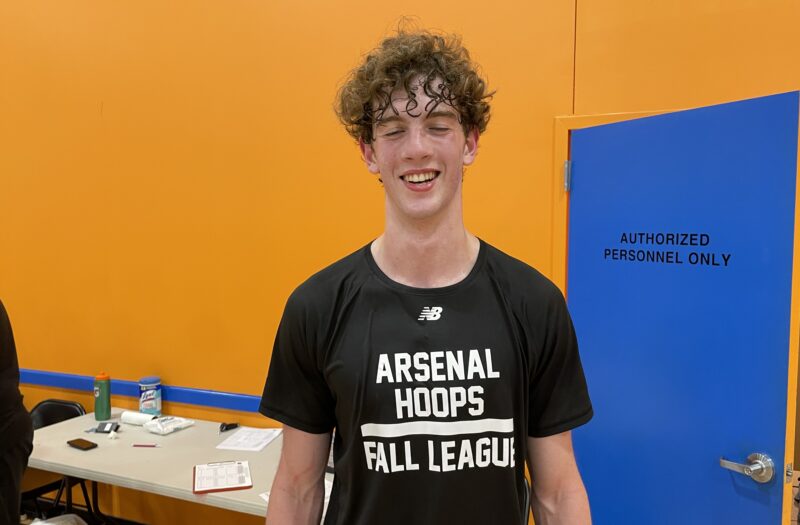 Prep Hoops Missouri takes a look at some of the top standouts from Saturday’s first day of action at the Arsenal Fall League in Wentzville.

Ethan Fauss Ethan Fauss 6'7" | PF Clayton | 2023 State MO (Clayton): The 6’7″ 2023 forward has one of the smoothest shooting strokes in the state and he displayed it on Saturday as he knocked down six 3-pointers and scored 30 points. His release is quick and there is no wasted motion in his shot. He is also very skilled on the perimeter as a ball handler and passer with good court vision. He also put it on the floor and scored on the drive. He was one of the biggest stock risers over the summer. He followed up on Sunday with a 42-point performance.

Evan Simon Evan Simon 6'0" | PG Kirkwood | 2025 State MO (Kirkwood): The 6’0″ 2025 point guard is a very talented playmaker and scorer who plays with a lot of swag. He scored 27 points on Saturday and he did it in a very efficient and entertaining way. He kind of laid back in the first few minutes and distributed the ball and let things come to him. When he asserted himself on offense, he was dropping 3-pointers, creating shots off the dribble and getting buckets from all three levels. He has full confidence in his handles, passing skills and ability to shoot the deep ball.

Eddie Smajic (Vianney): This was my first time seeing this talented 6’5″ 2026 forward in action and I was very impressed with his all-around skill level. He has a good feel for the game as he plays at his own pace. He can use his strength to take smaller players inside and his perimeter skill set is excellent. He can knock down 3-pointers off the catch and he can also create with a nice step-back jumper. He displayed a little bounce late in the game with a pair of impressive transition dunks. He finished his first game with 30 points.

Nathan Bobikiewicz (Wentzville Liberty): The 6’5″ 2023 forward finished with a game-high 21 points in the opening contest of the league. He is a big matchup problem with his size, physical strength and skill set on the perimeter. When he attacks the basket, he’s coming hard and with a lot of authority and he doesn’t mind contact. He can also knock down 3-pointers off the pick and pop and he also has good footwork to escape from defenders.

Noah Barnes (Windsor): A 5’10” 2025 point guard was very impressive in the opening game with 19 points and some very flashy ball handling and passing. He is very creative with the ball as he can get his own shot and score at all three levels. His court vision was on point as he dropped some very nice dimes for easy buckets. He’s tough and he doesn’t mind taking the big shots in clutch moments. He also picked a few pockets on defense and gave up his body to take charges in the lane.

Donovan West Donovan West 6'1" | PG Fort Zumwalt East | 2024 State MO (Fort Zumwalt East): A 6’0″ 2024 combo guard is an impressive two-way performer who scored 20 points in his team’s opening victory. He is an excellent athlete who rebounded very well from the guard position. He also rose up and blocked a few shots in transition while also darting passing lanes for steals. He has a quick first step to the basket and he finished well at the rim. He also hit a few nice step-back 3-pointers.

Michael Berry (Gateway City): The 2023 guard was one of the most impressive athletes that I watched during the first day of league competition. He scored 23 points with most of them coming on slashing drives to the basket. He has some flashy handles and a nice crossover dribble to escape from defenders, plus he had a nice burst to get downhill. He delivered some nice passes while on the move to cutting teammates. He also hit a couple of perimeter jumpers down the stretch.