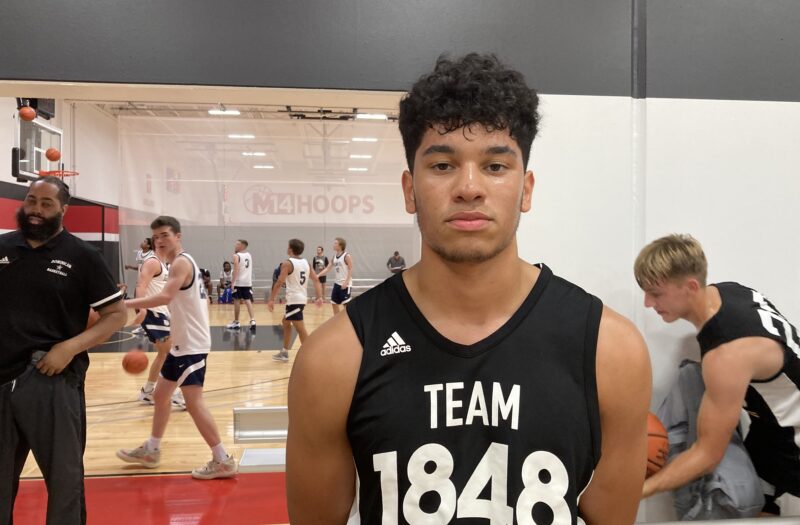 PHI closed out the summer with The Last Dance in Chicago!  We examine the best prospects from around the country position by position including here in The Last Dance: Scotty B’s National Wings!

Class of 2025 shooting guard opened up the event with a monster 19 point outing where he scored effectively from al three levels.  Was effective getting to the rim with his burst where he also managed to get to the line.  Hit three triples in the game.  Fluid wing that can really score.

Physically built two guard that was a straight bucket getter in their contest against Chicago Lockdown.  He dropped six triples both off the catch and pulling up.  More than just a shooter he uses his strength to finish through contact in the paint on and-1s.  Tough kid with major scoring pop!

Lawton also had a monster game from the perimeter for Team 1848 out of Wisconsin.  One of the better shooting combos we saw on the circuit this summer.  He was lights out from three letting it fly with a ton of confidence.  Active hands on the defensive end.

Sleeper guard for Team 1848 that we became big fans of throughout the spring and summer.  Stop and pop jumpers along with deep threes.  Kid has the “it” factor as well.

Tucker is a lefty three man that is a crafty driver that finishes well around the hoop and handles well in the open floor.  Did a lot of his damage in the transition game.

The wing from Iowa drew quite a few high-major coaches to his games in Chicago.  Against Breakaway he came out aggressive looking to score in bunches which is exactly what he did.  Four triples and was passing it well too finding his teammates on the move.  Finishes well through contact with his strong frame.  High-major prospect.

Phillips stepped out later in the weekend with Wilkins out with an injury.  Rangy small forward that gets on the offensive glass, slashes off shot fakes, and is a streaky shooter.  Best play was when he swatted a shot at the top of the key and took it the other way for a dunk.

Shoulders was one of my favorite new names from a national standpoint from the weekend.  The class of 2024 small forward has nice size and aframe.  Can really shoot it well at his size with a clean release.  Has some athleticism which was shown in the open floor.

Active combo forward that proved to be a nice defender getting steals and often taking them the other way for layups.  Did a nice job of getting to the free throw line and was productive playing against teams a year older than hin..

Griffin Elite guard put up big numbers as the powerfully built wing did damage from multiple levels.  Got to the rim with an explosive first step.  Loved his pull up game from 15-18 feet which he was also able to stretch out to three on occasion.  Scoring two guard that flat out gets buckets!

What a show this DTO shooting guard posted in our first viewing of him.  He literally could not miss from three.  Drained seven of them on his way to 29 points.  Showed some shake off the bounce on occasion, but it is his long distance shooting that will be his biggest value at the next level.

Lean 2024 small forward that has some projectability.  He liked to take his man on straight line takes to the cup finishing through contact.  Good slasher that crashed the offensive glass and was a solid wing defender!

Fisher is a prospect that was a standout all spring and summer.  Power wing that is a bit undersized, but he makes up for it with his absolute tenacity.  Force taking it downhill where he finishes with power/athleticism along with getting to the line at a very high rate.  Relentless nature to his game.  He plays all out!

Heck had a great close to the summer with his play in July.  Small forward is a shot maker from the perimeter that made threes at a high clip including when we saw him in Chicago.  D2 programs should be jumping all over this shooter with size who has a good feel.

Strong bodied small forward that was an effective scorer on straight line takes and using his strength to finish at the cup.  Worked in some floaters and transition scores.  Good glue guy at the next level.

Land has excellent size and the rising sophomore uses his long strides to make plays on both ends.  Capable three point shooter along with the ability to finish around the cup.  Pure upside with this 2025 prospect!

St. Louis two guard that has impressed each and every time we saw him during the spring and summer.  Skilled wing that can shoot it from distance and has a fluidity to his game.  Productive wing that has some helium heading into his junior season!