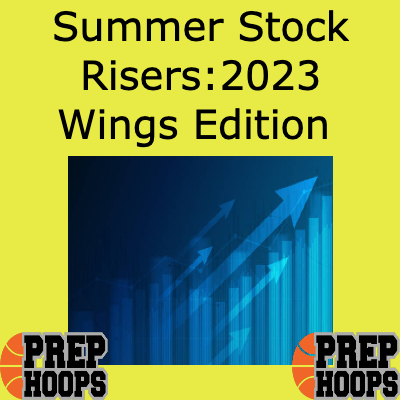 David is a natural slasher who is great at using his frame to bounce off defenders on his way to the rim. He never gets bumped off his path to the rim and is great at turning the corner on his opponents. His ability to explode out of the triple threat and get around his opponent was very impressive for his size. When he has his head set on finishing, he explodes in the paint finishing dunk after dunk within the half court and on the break. I was very impressed with how well he went coast to coast and the confidence he displayed with a live dribble. He is a strong wing prospect who has the ability to move laterally and should be able to naturally defend multiple positions. I would like to see him work on timing up steals and being a more disruptive force on the defensive end of the court. He has all the tools to become an effective two way player at the next level.

Quinton is an explosive athlete who loves to use his athleticism to finish at the rim, constantly out leaping his opponents on both ends of the court. He threw down some impressive dunks but probably turned more heads with how well he chased down his opponents and sent their shots careening off the backboard. He chased down multiple opponents on the fast break, but also showed an ability to slide over as a help defender to protect the rim. He has all of the athletic tools in his bag necessary to be a successful undersized forward or a wing option if he continues to develop. His ability to leap multiple times as he fight for rebounds or defending the rim. I loved watching him work on the interior, fighting hard to clear space for himself. Hairston was named to the all region team last season as well, this is one to keep your eye on! I would like to see him work on his foot speed and how naturally he runs the floor as a rim running option.

Jace is a highly skilled three and D wing who showed an ability to not only lock up anyone down low or on the perimeter, but also showed off his elite foot speed and the ease in which he finishes on the break. He is an incredibly mobile player for his size which allows him to dominate in the full court. His energy makes him a tremendous rim runner on the break and he displayed a handle to get past his opponents. He fights for positioning down low, allowing him to grab rebounds and make the right outlet pass. He knows what kind of force he is as a trailer option as well, routinely blowing past his opponents with his end to end speed and punishing the defense for not being set after a missed shot. Where I was most impressed with his game was his ability to defend on the perimeter for his size, not only defending on the ball but also contesting shooters from deep positioning in the paint. He had a block on a jump shot in the corner that had the entire crowd suck in air after seeing him sky through the gym to take away that opportunity. I would like to see him work on his decision making with a live dribble, and also the consistency in which he screens and rolls to get open looks for himself.

Will is a high level facilitator at the combo guard/ wing spot with his incredible size and athleticism. He could be labeled a point guard with his natural feel to the game and the ease in which he passes teammates open. He always has his head up to make the right pass, and always seemed to be fitting a pass through a tight window, both on the fast break and within the half court set. I was very impressed with the ease in which he handled the ball in the court, making him a real weapon to go coast to coast. Cypress Creek is beginning to load up on some young talent, this kid and this team is one to have your eye on!

Muizz is an athletic wing who thrives off his ability to get to the rim whenever he wants, and make all of the right passes ahead and decisions on the floor. I was very impressed by the athleticism he displayed on both ends of the court. He skied to finish lobs on the offensive end, and always seemed to be in the right spot to slide over and take a charge when necessary. I would like to see him work on his intensity on the defensive end, at times he got easily boxed out and seemed to be looking ahead to playing on the offensive end rather than securing a rebound and ending a defensive possession.