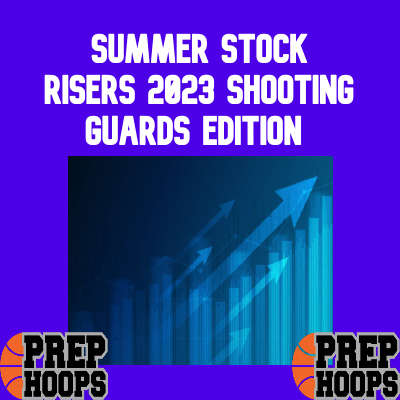 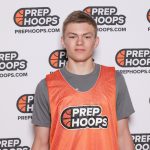 Ethan is a high level guard who showed an ability to naturally score off the bounce and loved getting to his pull up across all three levels. He calmly scored and took big shots whenever his team needed them the most. His aggressiveness and ability to get his shot off beyond the arc was very impressive. He attacked spacing very well, and always took what the defense gave him every time down. I was very impressed by his athleticism when he attacked the rim, evading contact and hanging in the air on his way to the basket. He is an explosive athlete on both ends of the court, he used his athleticism to clean the glass and reject shots off the backboard as well. He is an aware help defender who is not afraid to scream all the way across the court to protect the rim, something you do not see often out of guards his height. I would like to see him work on his decision making and improving his overall handle at full speed as he turns the corner within the half court.

Trey is a sharp shooting guard who specializes in scoring off the bounce from all three levels of the floor. I was very impressed at the ease in which he got his shot off every time down the floor. He is great at taking what the defense gives him, and has the ability to play off the ball if necessary. He makes all of the right decisions and moves without the basketball. He calmly operated out of the corners, and attacked hard closeouts with quick crossovers to get to the rim. Where he stood out the most was the ease in which he could stop on a dime and score over the top of his defenders. He easily scored off the bounce, and was able to get his shot off over seemingly anyone. I loved watching him attack defenders in the open court and calmly shooting over the top of them. He has a great frame with the ability to attack his defenders off the bounce and finish in the paint, or score in the mid-range or beyond the arc. When he attacks the basket, he showed an ability to adjust his shot angle and hang in the air to avoid contact.

Sean is a high level glue guy with his ability to catch and shoot, put the ball on the floor and also use his energy to wreak havoc on the defensive end and the glass. He has tremendous potential to become a high level 3 and D type shooting guard at the next level that would easily fit alongside a ball dominant wing or point guard. I was very impressed with his motor and his relentlessness on the court. He is willing to rebound and always seems to fly in and grab rebounds and keep his head up to push the tempo and finish on the break. He has a good handle to get him down the court and finish at the rim. Down the stretch, he is not afraid of the moment and is always ready to attack the basket and get a high percentage shot up when it really mattered most. Pasadena Memorial has some real talent in this next year with a dominant center, a skilled point guard and Dansby as the glue guy ready to do all of the little things to help the team win. If you are in the Houston area, you need to check this team out!

Randy is an athletic slasher who thrives at getting into the paint, but also scores at will off the bounce from the midrange and beyond the arc. Where he makes is mark is floating towards the rim with his impressive athleticism. I was not surprised to find out he is a high level football player as well, using his athleticism and aggressiveness to get wherever he wants on the court is usually a pretty strong indicator of a football background! He has a non stop motor which allows him to relentlessly attack the basket. With the amount of success he had in the paint, the defense began to sag off of him to cut off driving lanes to the rim, which he calmly took and scored at a high clip in the midrange and beyond the arc.

Johanthan is a sniper off the catch who really threatens the defense with his ability to score off the bounce from all three levels of the floor. I was very impressed with how well he scored with a live dribble, and routinely put pressure by getting to the rim with his handle. He attacked hard closeouts and was great at playing off another lead guard. He took what the defense gave him and showed an ability to stop on a dime and score in the mid-range. I also loved watching him move without the basketball, routinely filling space on the perimeter and drawing attention by cutting backdoor to the rim.