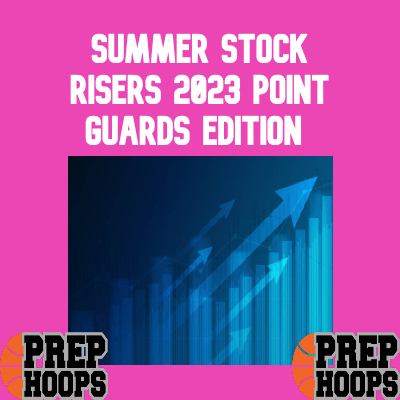 Keith is a lightning quick prospect who sees the floor at a high level, and is great at using his shiftiness to dominate the game on the offensive side of things. His ability to read the defense and make quick decisions allowed his teammates to get easy looks in the paint, as well as on the perimeter for himself. He is a true point guard as he operates the pick and roll, knifing through the defense and forcing a second defender to make a decision. He calmly and confidently got to his spots in the mid-range and the lane, getting to his floater with real consistency. He always put just the right amount of touch on the ball to get it above the help defender and softly into the basket. I was very impressed with his ability to score from the perimeter, calmly knocking down shots off the catch from beyond the arc, but more importantly confidently attacking his on ball defender. Defensively, he is aggressive and knows how to use his active hands to poke the ball free and run coast to coast. Richard has all of the athletic tools and awareness to play on or off the ball at the next level.

LaRoderick is an aware point guard who can create for others, and excels at making things happen in the pick and roll. He had a great connection with his big man who set good screens and rolled hard to the basket, or slipped the screen after the defender expected the contact. Time after time Davis found his teammates with timely passes on the interior, allowing them to quickly get up shots down low. He is a force attacking the rim, and can do so not only off going up strong and using his frame to attack the last defender, but also getting up a soft floater to score over taller defenders. I was very impressed with his touch down low for his size and he looks to be a real weapon with his ability to drive and kick to set up his teammates on the perimeter.

Zyrin is a confident guard who loves to turn the corner on his opponent, but also score off the bounce in bunches. He loves scoring in the mid-range, calmly and quickly pulling up in front of his opponent. He is quick and shifty and got around defenders with ease. Whether he was manipulating them with jab steps out of the triple threat or changing his speeds, he always seemed to be a step ahead of his opponents. He used it as a weapon in the full court, pushing the tempo and getting to the rim. He unselfishly made shovel passes and dump off passes to his bigs after drawing a second defender. He sees the floor like a true point guard in the half court as well, calmly making the right reads in the pick and roll.

AJ is a skilled two way point guard who has a real ability to lock up the best player on the court with his ability to move his feet and keep his defender in front of him. I was not surprised to learn he was a dual sport athlete, playing cornerback for his varsity team for the last two years. He is an impressive player with his ability to facilitate but also take away high level guards. He was great at using his length to harass ball handlers and poke the ball free, coming up with a few steals in the times that I saw him play. He always has his head up to make the right reads both in the full court but also within a half court set.

Jarek is an aware combo guard who can score off the catch from beyond the arc, create looks for his teammates and hunted his own shot across all three levels. I was very impressed by the ease in which he scored off the live dribble, constantly creating space with his crossovers and the threat he is to score in the paint. Schmittou scored very well but also was unselfish and routinely found his dominant big man on the block, showing off his ability to provide crisp and timely entry passes into the post. He understood the kind of mismatch he had on his team and loved using it to manipulate the defense and force them to send two defenders at him.