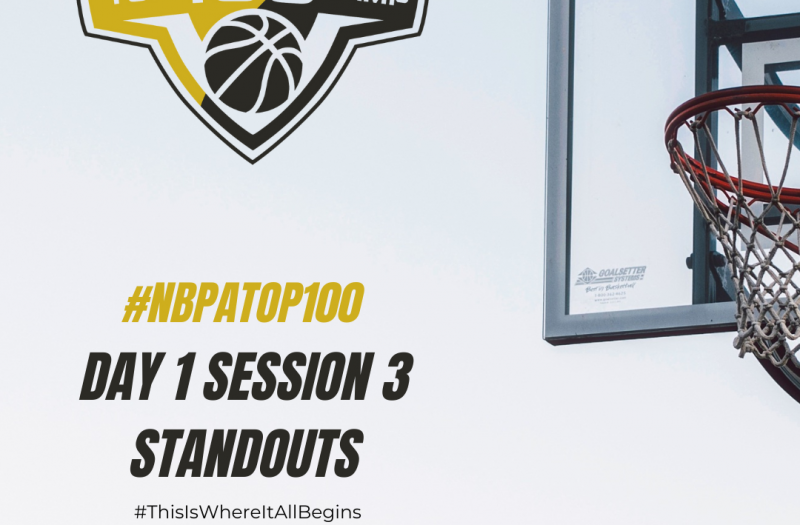 During Session 3 on day 1 at the #NBPATop100, I checked out the Houston vs. Chicago match-up, and here are the standouts from that contest…

He has the length and ability to make shots and not just any shots but tough shots in the paint.

Cody is a player that can create his own shot if needed and knock down open looks. Just going off this session alone, he left me with many questions about what he is bringing night in and night out. His final stat line for this session was: 2pts (1-5, 20%).

AJ has good positional size at the PG spot. He can play on and off the ball without dropping in production at either spot. He is the caliber player that causes defenses to overload their coverage in attempts to slow him down because he is so hard to contain with just one defender.

You can tell he has been battled-tested because he was super calm and poised against intense ball pressure at the point of attack.

He plays at a nice pace and keeps the offense fluid. He showed his threat level from anywhere in the half-court when the ball is in his hands. He just plays with a great understanding of the game. He finished the session with the following stat line: 6pts (3-5, 60%)

Darryn caught my eye with his disruptive on-ball defense. His length caused a lot of problems for ball-handlers looking to get their shot off, as he contested and altered jumpers on the perimeter and attempts at the rim. He is very instinctive on D, as he makes getting the ball to his man very hard by playing the passing lanes. Offensively he showed his ability to score at all levels with a nice touch with his perimeter J.

He was efficient with his scoring opportunities, which makes him an attractive prospect, especially since he just finished his freshman year.

He plays both ends of the court with the same energy and effort. He showed some very promising intangibles that will only continue to get better as he grows and continues learning the game. I am excited about his long-term development. He finished session 3 on day 1 with the following stat line: 12pts (5-10, 50%; 2-3, 67% from three)

Chris only played 21mins during this session, and unfortunately, he did not follow up his performance from the earlier session with another solid performance. He was a completely different player from earlier when he showed his court vision, good passing skills, crafty finishes, and perimeter shooting. The talent is there, but he struggled taking care of the ball. I understand this was day one, and guys were feeling their way through the first day of action, so I kept that in mind.

Chris, hands down, is a supportive piece that can impact the game on both ends.

I am sure he can do it and has done it before, but this session left me needing to see consistency of play. His stat line during this session was: 2pts (1-4, 25%), 4-rebounds; 2-assist/6-turnovers.

When you see that John stands 7’2, you immediately start to think of all the things he should be doing around the rim. Well, he definitely showed what he hangs his hat on, and that is being a rim protector. Even when he cannot get the block, his length and attempt at the shot alters what the offensive player is trying to do.

His presence and communication in the paint on the defensive end of the floor have to be respected.

However, his lack of mobility showed up as his production on the glass was missing, he struggled in space, and he is limited offensively. Despite those areas that are fixable, because of his 7’2 size and shot-blocking ability, he will always be a difference-maker anchoring down the defense. John’s stat line in this session was: 2pts (1-4, 25%), 1-rebound, 4-blocks.