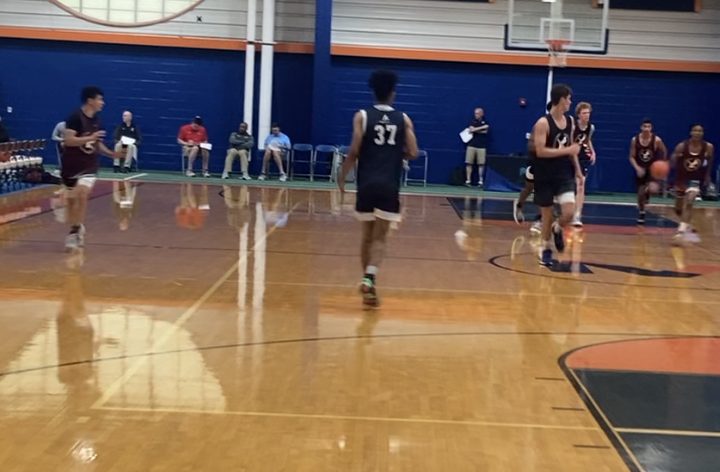 I attended the NEPSAC showcase live event this past weekend in Milton. There was a lot of high level talent on display. A lot of coaches from high profile division 1 schools, and all the way to division three coaches were there in attendance. This was a good chance for players to raise their stock, and for some player to get their first offer. Here is some of the standouts from the weekend.

The first team I saw play was Belmont Hill. Belmont Hill had a bunch of players who impressed me. Belmont Hill is coming off a very successful season, where they were one of the top teams in the competitive ISL league, and made the Class A Finals. With a few key contributors graduating, I except a few returns to raise their stock. Three rising Sophomores in the class of 2025, who were in the rotation last year, look to be the core for next season.

The first player who impressed me was

In the game I saw, Giacomo proved why I think he is one of the top three point shooters in New England, for the class of 2025. He went 4 of 5 from three point range in the game. He had a few nice drives to the basket, that just didn’t fall. He also took a charge in his first shift in the game. Every coach loves to see players throwing their body on the line, and taking charges! He showed the ability to get his shot off in multiple ways. He can shoot off the dribble, off screens, and catch and shoot. He has a fundamental shooting form, and he can get his shot off in a flash. Last season at Belmont Hill he led the team in three point shooting percentage. He has good ball handling skills. and can run the offense. Last season he was the first guard off the bench, and this season you may see him get the keys to the primary point guard for the team. On defense he plays very tough, and has good hands. Giacomo is a player I think that will keep raising his stock.

Links below is for two highlight from this past weekend. One of Giacomo hitting a pull up three, and the other link is of a nice pass.

The next player from Belmont Hill Class of 2025, who impressed me was

In the game Isaiah was able to get to the basket with ease, and did a good job finishing at the rim. Isaiah is a skilled player, and has good size for his position. As just a freshman on the Belmont Hill team last year, Isaiah started most games. Isaiah is an athletic player, with a smooth shot, who can get to the basket and score at all three levels. Isaiah is a very good defender, and rebounder as well.  Isaiah is still filling out, and is continuing to build up his frame. I think Isaiah has a very high ceiling. He is a smart player, and has the potential to play at the division 1 college level. Isaiah is a good teammate, and a good kid to have on your team.

Another player from the Belmont Hill Class of 2025 is

Jamari had a standout showing this past weekend. He was aggressive going to the basket, and drew some fouls. Jamari is a very good athlete, and a skilled player. Jamari has a high level quickness, and a super quick first step. Jamari is a versatile defender, and he can guard multiple positions. He has a very high motor, and a quick recovery. On offense he has the ability to drive, elevate, or shoot from three point range. I have seen him start filling it up from three point range before. Jamari had a standout game this weekend with 25 points. Jamari is a lefty, but he can finish just as well with his right hand. Not often you get a player who is as good of a player, as he is a person.
Here is the link to some highlights from his 25 point performance.