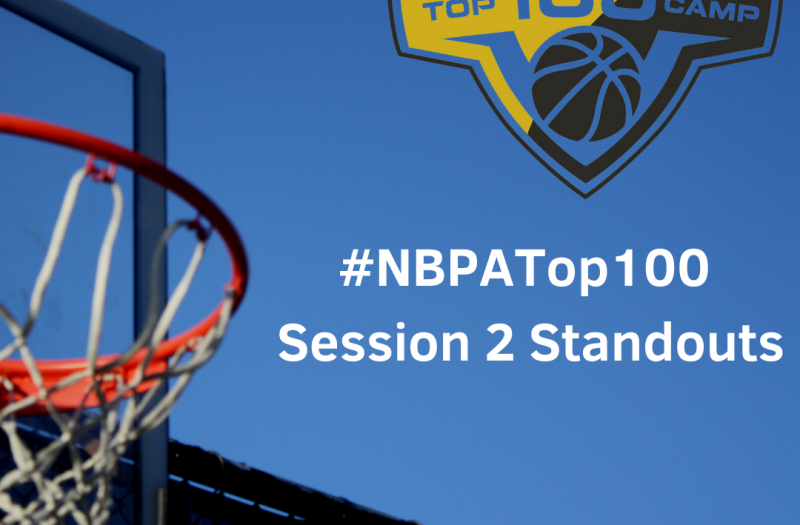 The NPBA Top100 is where it all begins, and for many players from across the country, the eyes of many looking for the beginning of the next wave of talent were in Orlando. The talent level was on each court, and you wouldn’t go wrong no matter which court you chose to sit down and enjoy the game. During session 2, I buckled down and watched the Dallas vs. Houston match-up, and here are the standouts from that contest…

What immediately caught my eye with Simeon was his play in the P&R. He is a highly creative, crafty, and patient ball-handler in ball-screen action, and his tools, along with his ability to read the defense, often led to excellent results for his teammates late in the shot clock. Simeon played at a consistently high level during this session as he controlled the flow of the game during his 36-mins of action.

He is a defender’s nightmare in one-on-one iso situations, as he is highly skilled with the ball in his hands, and when he is changing speeds and directions, it puts defenders in very compromising positions.

He knows how to create his own offense and showed he can create for others during the times he settled into a facilitator role. He showed elite burst and straight-line speed and seemed to just be a step ahead of his defenders during this session. I would like to see him continue to develop from behind the arc as the defense began to give space and wall up, giving him clean looks. Here’s his stat line: 11pts (5-9/56%; 0-1 from 3); 0-Assist/5-Turnovers

Myles made his mark in the contest by showing his lethal shooting from the perimeter. He was one of the best off-ball shooters during this session and could easily be a 3&D guy with a greater commitment on the defensive end of the floor as he has the size and length to be a disruptive defender.

He was efficient and consistent and kept the floor spaced as he stood along the arc waiting for his teammates to find him for a c&s opportunity.

As Myles continues to work on cutting and relocating, he will set himself up for potentially more looks, as it is easy to guard a target that is not moving. One thing is for sure, he showed all in attendance that he can get it done from behind the arc, a tool that is required in today’s game. He finished with the following stat line: Team-High 15pts (5-7/71%; 3-3 from 3)

Flory came in one Day 1 and made an immediate impact and impression. He is an agile big that dominates the paint on both ends of the court. His length was a factor that contributed to his offensive production and his defensive dominance. Offensively he scores exceptionally well in the paint and at the basket, as he posts hard, demands the ball, has excellent footwork, and is capable of finishing with either hand even when contested. He’s a sure bet for any player looking to throw a lob, even if it is thrown in traffic.

He’s a quick leaper and plays above the rim, as he displayed by often securing the offensive glass leading to easy put-backs.

Offensively during this session, he was one of the most productive players when it came to scoring. He still has to continue to work on expanding his game outside of the paint and developing a consistent 13-17 foot jumper. Continuing to expand his toolbox with a face-up out of the post-up will give him a different look to be able to show the defense. On the defensive end of the floor, with his ability to quickly get off the floor, he protects the rim by challenging most of the shots coming into his domain. He is an active force on the glass that has to be accounted for by putting a body on him. He definitely made his mark on day 1, finishing with the following stat line: 16pts (8-9/89%); 7-Reb; 4-Blocks.

Nils caught my eye with his consistent play off two feet in the paint. He wasn’t ball-dominant but manufactured scoring opportunities, mainly off the offensive glass with put-backs or trips to the line. The times he was attacking off the bounce and getting in the paint, he was under control, and either finished in the paint or got fouled. He moved well without the ball, which helped with offensive fluidity. Nils play gave other scorers on his team all the room they needed to work, while he was a safe outlet for created scoring opportunities.

Nils is the caliber player that connects the dots on a team as he doesn’t need the ball to make an impact, and he has versatility on the defensive end as he can guard multiple positions.

He did not dominate any one phase of the game, but his ability to fill just about any role allowed his team to dominate. Nils finished with the following stat line: 12pts (3-6; 50%; 6-6 from the FT)

Comeh came in looking to make an impact, and it appeared he wanted to get it done by seemingly brute force. Putting it plainly, he looked to punish all who dared get in his way, as he was looking to finish hard at the rim, above the rim, and over anyone standing in the way. Comeh was in one mode, and that was attack. Playing against him is like being in the ring against an opponent, looking for the knock-out punch with every punch he throws.

Getting to the cup isn’t a difficult task at all for Comeh, as he is a downhill playing guard looking to put points on the board.

The single most critical factor to driving success is the spacing of the offense. At times Comeh carved out space, and at times he exploded down the lane when the offense generated it, but make no mistake about it; he is a playmaker off the bounce looking to make something happen. In a gym filled with athletes that play above the rim, Comeh reminded all not to forget to his mention his name when talking about these high-flying athletes. He finished with the following stat line: 8pts (4-7; 57%) 6-rebs

Aaron had some bright moments during the session, and those moments stood out on the glass and the defensive end of the floor. Aaron showed mobility and the ability to trace missed shots and secure the ball in traffic. His length and ability to contest and alter shots definitely had a significant impact on the game. Aaron has to continue to get stronger, which will help with his ability to resist stronger and more physical bigs. Right now, his frame is an easy target for deep seals in the paint. Offensively, he showed tools that are working and some that are still developing.

He is a big that can pass out of the post, which was a bright moment on the offensive end of the floor.

One thing that could make a lot of difference for Aaron is the difference in production when he fades with his turnaround jumper compared to when he does not. He got desired results when he just turned around and shot over his defender, compared to when he was fading away. He did show his ability to face up and attack off the bounce, and he will find a greater level of effectiveness as he gets stronger and fills out. He is a sure bet when it comes to finishing lobs or just finishing period above the rim. He finished with the following stat line: 8pts (4-12, 33%), 9-rebs, 4-assist.

TJ seemed to have it going from the tip as he had a good balance going between facilitating and scoring. He played with a nice pace and kept his scorers satisfied by equally distributing the rock around. Standing only 6’0 and amongst giants and physically imposing athletes, TJ competed with passion and intensity and made an all-around impact.

He is elusive with the ball in his hands, and coupled with his court vision, he leaves the defense guessing what’s next, which is often a scoring opportunity for either himself or his teammates.

He wasn’t afraid to test the waters in the paint amongst the giants as he attacked off the bounce, and when he got his step, he quickly got to the rim and got the ball on the glass. He struggled from the field as he had good looks that just would not fall and lay-ups that wouldn’t go down. Despite the numbers, anyone watching walked away, knowing that the stat line could have easily been a robust one in the opposite direction. Here is how he finished: 7-pts (2-11; 18%; 1-4 (25%) from 3); 3-assist/3-turnovers