MEMORIAL DAY INVITATIONAL: 17U Standouts (Plus one 16u) 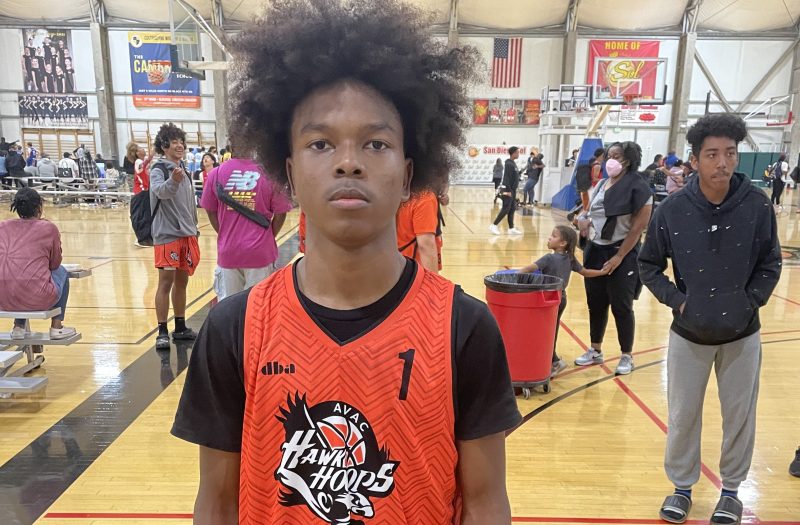 One of the biggest SoCal AAU tournaments of the year went down this Memorial Day weekend, the Sol Memorial Day Invitational. I was able to attend a few games and was very impressed with the talent there. A lot of exciting young players were on display as I scanned the gym but there were a handful of players in the 17u division that caught my eye

Henderson was electric whenever I got to watch him play. He was one of the best passers in the entire tournament finding open teammates in the half-court set as well as in transition where he threw multiple flashy dimes. Henderson also has great scoring ability when he’s not playing the role of a point guard as he is a confident shooter hitting threes in transition and being able to get to the rim and finish around bigger defenders with his athleticism. Henderson was a joy to watch play and has a bright future ahead of him.

Harris’s size and athleticism at such a young age make him a very interesting prospect to look out for. Harris dominated on the boards and was blocking shots with ease, his height, and vertical ability make him a tough finisher and he displayed his ability to play above the rim catching lobs and dunking the ball bringing big bursts of energy to his squad. Harris has all the physical tools needed to be a great player and he certainly has enough time to develop into a high-level prospect

Jack was one of the most fundamentally sound players I got to watch this tournament, he just displayed a great feel for the game making it look easy for him. Jack used his strong frame well finishing off two through contact and using some quick spin moves to get to the basket. Jack also showed off a great shooting stroke hitting multiple threes keeping defenders honest with knockdown shooting. Jack boxed out well grabbing rebounds and clearing out his matchups and would make the hustle plays needed. Jack is a good young player who will look to continue having a solid summer.

Alpizar was one of the most impressive players from the post during the tournament. He was able to exhibit great playmaking from both the high and low post making the correct plays finding cutters and taking good shots. His wide frame makes him hard to guard and makes his footwork even more effective in creating space when operating down low. Alpizar fights for every rebound and showed the ability to hit an open jumper, he is a huge piece of a solid Mavericks team that will continue to improve this summer.

Harris with his long wingspan was a great rim protector and rebounder getting his hands on almost every ball up for grabs. His length allows him to be a force on the offensive boards and make his shots tough to contest, he exhibited his potential to be a stretch big pulling and hitting multiple threes. Once he fills in his wiry frame Harris will become a very good prospect as he continues to rapidly improve and shows a lot of bright flashes

Scherer was one of the craftiest guards on display during the tournament. Scherer would find ways to score over much bigger defenders using euro steps and tough reverse finishes with both hands to get to the basket. Scherer also had a great touch with his floaters and was locked in as an on-ball defender showing off a high motor on the defensive end and making his presence felt despite him being on the smaller side.

While at my time at the tournament I was only able to mostly catch varsity/17u division games I was able to watch Hill perform with his MonStarz squad and I was very impressed with what I saw. Hill plays with high energy on both ends as a relentless slasher to the rim in both half-court sets and in transition finishing strong through contact. Hill was great as well as on the defensive end where he would hound his on-ball matchups and make the right plays in a press. Hill had multiple plays where he looked like he could finish above the rim and as he grows and develops as a player those plays are sure to come.