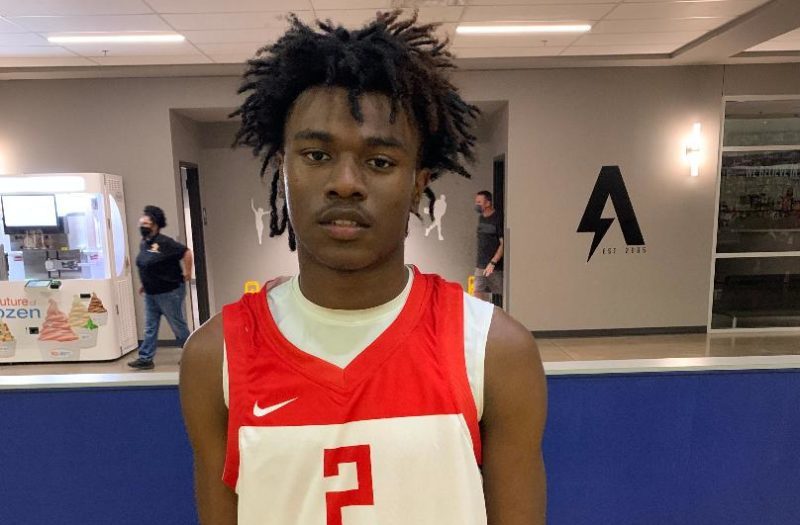 Check out my scouting reports and analysis on some of the top prospects in attendance at the GASO (Great American Shoot Out) in Bryan/ College Station, Texas! These guys really shined during as they lead their teams to success on Championship Sunday! These guys were all in the semi finals games and lead their team through their constant aggression and play!

Peyton is a complete guard prospect with an ability to create space with his handle, create opportunities for his teammates, attack the rim or score from beyond the arc. He had a great matchup with another high level point guard, in which he attacked him time and time again down the court. His aggressiveness with the basketball bled through into every aspect of his game, flying around the court after loose balls and long rebounds. He is a great rebounder for his size and position and even got a few easy looks by following his own shot. He is a deadly scorer when he decides to pull up and can do so from beyond the arc or in the midrange. I was very impressed by the ease in which he scored off the bounce. His ability to attack the rim opened up every other aspect of his game. Jones is one you need to keep your eye on!

Kaden is a high level wing with the ability to play the small ball forward role with his consistency in the paint on both ends of the floor. He showed an ability to routinely finish out of the pick and roll and on the fast break. He had a play where he caught a tight bounce pass and threw down a monstrous dunk that got everyone in the gym excited (Check it out below, thanks to TexasHoops TV and GASO for the highlight)! His athleticism was on full display, but not only to finish dunks. He made timely leaps to reject shots at the rim and snatch rebounds. I was very impressed with his ability to do all of the little things on the defensive end, anchoring his team’s defense and snatching rebounds. He is a confident defender on the perimeter with his ability to move his feet but also use his active hands to poke the ball free. He made blocks and steals just as his opponent was about to make a move, perfectly timing up his hands. He made great decisions when he had the ball in his hands in the open court and showed an ability to go coast to coast and finish on the fast break. He moved without the ball and dove to the basket and sealed off his opponents for easy looks down low.

Kevin is a monstrous yet switchable wing prospect who knows how to use his size to finish in the paint, yet also create separation with his back to the basket. He showed an ability to handle the ball and affect the game from all three levels of the court. Juarez played well and made good decisions out of the high post and initiated offense on the wings. I was very impressed with how smart he was when attacking a single defender. He quickly spins out of trouble and steps through double teams into whatever space he has. He works very hard on both ends of the court with a non stop motor as soon as the ball gets tipped. He hustled after every rebound on both ends of the court, and even out rebounded a 6’8 big man he played alongside. He showed an ability to catch any pass that was thrown to him and quickly make the right decision, wether it was make the swing pass, put the ball on the floor and get to the rim or catch and shoot. Juarez is great at using his size to get his own looks down low, but is already showing an ability to defend anyone on the perimeter. He has great food speed for his size already, and could easily develop into an aggressive and switchable small ball center. Juarez is one prospect you have to keep your eye on as he goes into his senior year.

Sean is a high level glue guy with his ability to catch and shoot, put the ball on the floor and also use his energy to wreak havoc on the defensive end and the glass. He has tremendous potential to become a high level 3 and D type shooting guard at the next level that would easily fit alongside a ball dominant wing or point guard. I was very impressed with his motor and his relentlessness on the court. He is willing to rebound and always seems to fly in and grab rebounds and keep his head up to push the tempo and finish on the break. He has a good handle to get him down the court and finish at the rim. Down the stretch, he is not afraid of the moment and is always ready to attack the basket and get a high percentage shot up when it really mattered most. Pasadena Memorial has some real talent in this next year with a dominant center, a skilled point guard and Dansby as the glue guy ready to do all of the little things to help the team win. If you are in the Houston area, you need to check this team out!

Erik is a high level wing who can play the small ball 4 role if necessary who displayed an ability to rebound, defend on and off the ball, and finish down low. Where I was most impressed with his game was his ability to defend any position on the floor. He has active hands to poke the ball free from guards and their live dribble, but also can bait his opponents in the passing lanes with his long arms. He is great at using his length to his advantage to really affect the game with his aggressiveness on the defensive side of the ball. In the paint, he is a willing rebounder who is good at using his frame to seal off his opponents. He always has his head up and keeps the ball high and out of his opponents reach, and then quickly make the right outlet pass. In the half court, he routinely made the extra swing pass to set up a teammate for a better shot. He made good decisions out of the high post and found cutting teammates.

Cooper is a complete three level scorer at the combo guard position who lives at the free throw line due to his aggressiveness and his skill attacking the rim. There were plenty of instances where he adjusted the ball in the air to draw contact and put the other team in foul trouble. Heaton was his team’s leading scorer in most games this weekend due to his ability to score off the bounce in the midrange and beyond the arc. Once the defense sat back to cut off his driving angles he calmly shot over the top of them. He drew plenty of attention on the offensive end and was good at stepping through a second defender closing out and making the right read to set up a teammate for an easy look. TWE really is a strong team with their unselfishness and ability to pass the ball to find the best shot possible, and because their leading scorer is so unselfish it makes everyone easy to fit right in. I would like to see him continue to work on operating out of the triple threat and creating space out of the triple threat with jab moves and hesitations.

Kaden is a high level combo guard with his ability to score off the bounce from all three levels and really takes what the defense gives him every time he can. He is a confident scorer who showed an ability to pull up from beyond the arc or by attacking the rim and really selling the drive and stopping to score in the midrange. I loved his willingness to push the tempo and run the fast break. He made great passes ahead, and had one picture perfect 3/4 court pass that hit his teammate in stride for an easy layup. Lewis’s ability to go coast to coast after catching an outlet pass really allowed his team to flip the game around and burn teams on the fast break. I would like to see him work on controlling the speed of the game and operating more out of the half court.

CJ is an acrobatic finisher who thrives at getting into the teeth of the defense with his handle in the open court and finishing amongst taller defenders. He lived on the fast break with his high energy and good foot speed with a live dribble. His ability to finish and evade contact allowed him to finish through anyone else who slid over to draw a charge or block his shot. He made great decision on the fast break to slip through driving lanes and make the right pass ahead to set up a teammate. He was an intense player who showed a willingness to rebound and then run the fast break. I would like to see him work on his decision making in the half court and out of the pick and roll.