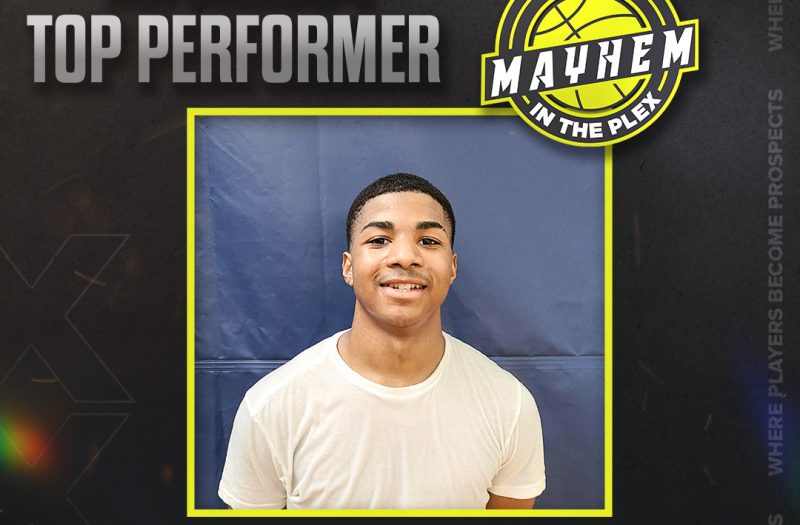 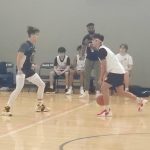 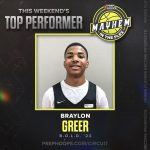 Prep Hoops’ very own Mayhem in the Plex continued an exciting weekend on Sunday in Fort Worth, Texas. After a busy Day 1 of nearly 100 games, all 80+ teams comprised of 15U, 16U, and 17U rosters competed in 75 more games on Day 2 at the Game On Sports Complex and Haltom High School. Below we review five standout performers from several of the games at the Game On Sports Complex. 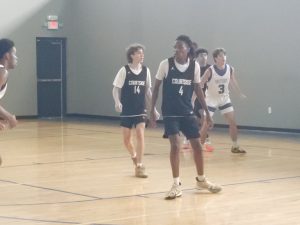 Prep Hoops’ very own Mayhem in the Plex continued an exciting weekend on Sunday in Fort Worth, Texas. After a busy Day 1 of nearly 100 games, all 80+ teams comprised of 15U, 16U, and 17U rosters competed in 75 more games on Day 2 at the Game On Sports Complex and Haltom High School. Below we review five standout performers from several of the games at the Game On Sports Complex. See more standout players from Mayhem in the Plex here: Best of Day 1 | Best of Day 2 | All-Defensive Team | All-Offensive Team Pt. 1 | All-Offensive Team Pt. 2 #14 Jackson Todd - 2024 - 6’0" - Guard - Courtside United Basketball Club 2024 Todd stood out like a shining star in one of the early games of Day 2 in a matchup between Courtside United and the Victory Academy 2024 Blue team. While Victory Academy came away with the win thanks to contributions from several of their team members, Todd carried the load for Courtside United and did everything in his power to keep his team in the game. He was making plays on both ends of the court and put on a dominant performance. His ball skills allowed him to get to anywhere he wanted with ease, maneuvering through and around the defense even with all the focus and pressure on him, and he was hitting his shots consistently from all levels. He drained pullup midrange and 3-point shots at will and finished tough layups in the paint on several occasions. He pushed the pace on fast breaks, and he did everything he could to get his team involved, dishing out pinpoint passes to cutters in the paint and shooters around the arc. Even with the massive load he was carrying on the offensive end, he stayed active and energetic on defense. He jumped into passing lanes and bothered the opposing ball handlers, coming away with several steals throughout the game. #23 John Gray - 2024 - 6’0" - Wing - Hoops Lovers Inc 2023 Gray and the Hoop Lovers came up against arguably the best team in the entire circuit on Sunday, the Welcome to 4 Vegas Hot Shots. The Hot Shots were clearly on another level, but the Hoop Lovers put up an inspiring fight from start to finish led by John Gray. While there wasn’t much that could be done on defense, Gray stayed active with his hands and was able to knock the ball loose on several occasions, most importantly when chasing down fast breaks and knocking the ball out of the opponents’ hands as they were putting up a shot. On offense, Gray thrived. He was knocking down tough shots from all over the place, hitting dribble pullups from midrange and from beyond the arc. He was attacking and putting pressure on the paint, as well, forcing the Hot Shots to try and stop him, yet he still got several layups to fall through contact, getting an and-1 to go in the first half. Even though he had the hot hand, he never hogged the ball, kept it moving and spread the wealth around to his teammates, getting everyone involved. #33 Brogen Mangham - 2023 - 5’11" - Guard - Nike ProSkills Austin 2023 South Austin Mangham led a well-rounded and skilled ProSkills team to a win over the San Antonio King Hoops 2023-1 team on Day 2, and he did it through spirited play on both ends of the court. He fit in perfectly with his team and never handled the ball for too long, doing most of his damage through his off-ball movement, making sharp and constant cuts to lose his defender and worked within the ball movement of his team’s offense. He hit at least two 3-pointers in the second half and finished around the rim on several occasions. Nothing came easy for him in the paint, but he displayed a fantastic touch even when draped by defenders and knocked down tough layup after tough layup. He stayed extremely active on defense and made several plays on the ball, securing at least one steal after knocking the ball out of his opponent’s hands and getting at least two blocks in the first half. He also was extremely persistent on the boards and made sure to secure defensive possessions for his team through boxing out and coming away with strong rebounds. #1 Braylon Greer

Braylon Greer 5'10" | PG Berkner | 2023 TX - 2023 - 5’9" - Guard - Better Off Living Dreams 2023 Greer hit the shot of the day with his team all tied up with Hard Hoops 2023 with 10 seconds remaining. With the clock winding down, Greer dribbled the ball to the top of the arc, hesitated for just a second, and then released a cold-blooded three-pointer with 3 seconds remaining to put his team up for good. The game-winning shot was enough to earn standout honors for the day, but he did so much more throughout the game to get his team to that point. He was attacking the basket consistently with his strong and shifty ball handling, getting into the paint and hitting layup after layup, several of which came late in the game when he was going back and forth with Hard Hoops’ Justin Buenaventura

Justin Buenaventura 6'0" Vines | 2024 TX . His final 3-pointer came as no surprise either, as he was hitting long range shots all game long, getting at least two midrange shots to go in the first half and then hitting another three earlier in the second. He had his hands full with the quick and explosive guards of Hard Hoops, but he stayed active and was able to get his hands on the ball several times, disrupting their flow and making them work for every basket. #2 Justin Buenaventura

Justin Buenaventura 6'0" Vines | 2024 TX - 2024 - 6’0" - Guard - Hard Hoops 2023 Buenaventura was explosive and exciting all game long against Better Off Living Dreams 2023, but it was in the final few minutes of the game that he really put everyone on notice. He was dissecting the defense from the tip with his incredibly quick first step and acceleration, getting to wherever he wanted on offense and hitting tough shots from all over. He sparked several fast breaks with his speed, and his shot was falling consistently from midrange and beyond the arc. In the final minutes with the game still in the balance, he went toe-to-toe with B.O.L.D.’s own star guard, Braylon Greer

Braylon Greer 5'10" | PG Berkner | 2023 TX , and Buenaventura was constantly getting to the rim at will. It seemed as if there was nothing they could do to stop him, other than make sure they score on the other end. The time ran out on Hard Hoops at the end of the game after Greer’s game-winning three, but if Buenaventura had the chance, there was little doubt he would have done something special to end it his way.

Subscribe to Prep Hoops Arkansas to get access to all premium articles and prospect rankings for as little as $2 per week with an annual subscription!