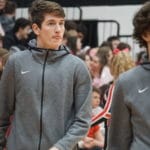 Ohio Valley Hoops Classic coverage continues as I recap the top performers from the SF position. The guys on this list played hard and most importantly, played with passion in winning/losing performances.

Boysko was a new name I had not heard of before Friday. With so much talent in the Patriots’ backcourt, it is easy to forget Boysko. He was most impactful however on the blocks. Fought with St. X defenders on the glass and even pulled down some offensive rebounds. This is even more impressive when you consider St. Xavier is not typically a team that allows rebounds easily. Boysko is on the smaller end for SFs at 6-foot-3, but he fits the role Liberty wants and can play his role.

Even in a losing effort, Cox-Holloway played well for the Spartans. The 6-foot-5 senior finished possessions on the defensive end on the glass, and contributed on the offensive end on a night when teammate Josiah Harris Josiah Harris 6'7" | PF Richmond Heights | 2022 State #243 Nation OH was struggling. Cox-Holloway has solid size for a wing and can be a solid secondary scoring threat for the Spartans should they struggle offensively.  Solid athlete with lots of upside.

Josiah Harris Josiah Harris 6'7" | PF Richmond Heights | 2022 State #243 Nation OH was struggling. Cox-Holloway has solid size for a wing and can be a solid secondary scoring threat for the Spartans should they struggle offensively.  Solid athlete with lots of upside. Josiah Harris Josiah Harris 6'7" | PF Richmond Heights | 2022 State #243 Nation OH (2022) Richmond Heights If you watched this game live, you may be wondering why Harris is on this list. The West Virginia commit found himself in foul trouble and couldn’t find a rhythm offensively in the first half. The 6-foot-7 future Mountaineer still found ways to contribute and be one of the better performers on the floor. Harris’ athleticism was tough to match for Fairfield at that position and come second half, Harris was truly anchoring the block and protecting the glass. Harris finished possessions and limited Fairfield’s 2nd chance opportunities. His presence on the floor alone forced Fairfield to change their defensive focus and change their gameplan entirely to shutting him down. Derek Jackson (2024) Lakota West Jackson was a new name for me to evaluate and he certainly did a solid job for the Firebirds in their victory Friday. Jackson came off the bench and showed he had the toughness needed to excel in the GMC. Stood his ground when defending Franklin’s  Nate Paarlberg

Nate Paarlberg 6'6" | PF Franklin | 2022 State OH in the paint and absorbed contact vs intiating defensively. Good stature and hands. I like his size at 6-foot-6 and feel he has a very polished game thus far in his young career. Mack Kistler (2022) Massillon Jackson Kistler was the last new name I saw Friday and truly played like a player looking to make a name for themselves. Kistler came off the bench for the Polar Bears and provided a lot of hustle plays they lacked from their starters in a loss to Lakota East. He dove on the floor for loose balls and fought tooth and nail on the glass. Kistler has a few nice offensive finishes through contact which was needed on a night where the points were not coming from their starters.