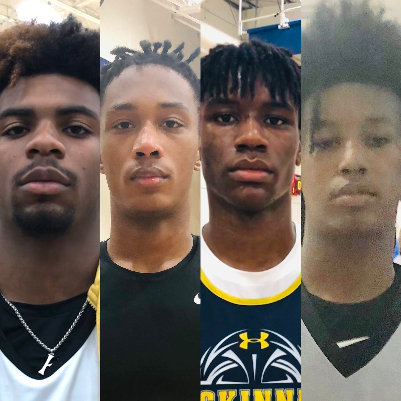 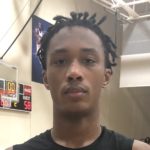 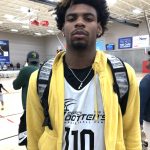 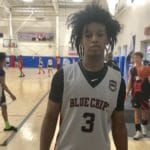 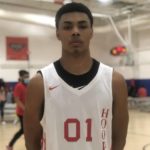 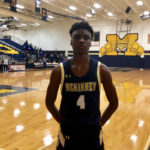 Texas’s 2023 is an incredibly skilled, potential-filled class stacked with several nationally ranked recruits and possible future NBA draft prospects. With the Texas high school basketball season underway, we take a peek into the newly updated 2023 Texas player rankings with a new look to the top-10 as well as the top-100 as a whole.

Chris Johnson 6'6" | CG Montverde Academy | 2023 #40 Nation FL had returned to Fort Bend Elkins as the reigning 6A Offensive MVP after dropping 15 points, 3 rebounds, 2 assists, and 2 steals per game on 49% shooting from the field. Johnson’s known for his highly versatile, all-around guard skillset matched alongside a phenomenal feel for the game that allows Chris to see and do everything on the court at the highest level. Chris Johnson

Chris Johnson 6'6" | CG Montverde Academy | 2023 #40 Nation FL has proven to be an amazingly talented bucket getter who’s a mid-range assassin supplied with one of the most deadly pull-up jumpers in the country. Johnson has mastered the art of knocking down off-balance and contested jumpers, the moment he catches his defender with their hands down he takes full advantage and immediately goes into his shooting motion. The Fort Bend superstar also excels greatly with the ball in hand thanks to his quick-twitch handles, movements, and reaction time, along with his elite burst of explosion. For someone that’s such a great bucket getter, he’s just as equally great of a dime dropper and distributor, accurately making the toughest passes and keeping each teammate involved. This young man is no slouch on defense either, Chris Johnson

Chris Johnson 6'6" | CG Montverde Academy | 2023 #40 Nation FL is as competitive as they come and doesn’t back down from a challenge one bit. He currently holds 11 Division 1 scholarship offers but has recently narrowed his choices down to the University of Texas, the University of Arkansas, the University of Georgia, the University of Houston, Kansas University, LSU, and Texas A&M. The ceiling for a player like this is sky-high, whatever college Johnson chooses to attend will be receiving a bonafide scoring threat.

Wesley Yates 6'4" | SG Beaumont United | 2023 State #35 Nation TX leaps into the top-5 after a phenomenal sophomore campaign where he became a 5A First-Team All-District performer that put up 450 points while nailing more than 80 three-pointers, averaging over 14 points, 3 rebounds, 2 assists, and 3 steals per game for the state champion Beaumont United Timberwolves. A high volume three-point sniper with unlimited range and true three-point specialist potential. Yates has made it abundantly clear that he’s one of, if not the best shot-maker in the state. This young man makes scoring and shooting the rock look as easy as can be, he’s equipped with a quick trigger, a smooth shooting motion, perfect elevation, and form, along with a deadly fast stop-and-pop pull-up game. Wesley Yates

Wesley Yates 6'4" | SG Beaumont United | 2023 State #35 Nation TX already displays a college-ready build and he uses exceptionally well to his advantage while attacking the basket, always protecting himself and the ball in mid-air, creating space, and using his strength to shed off a defender. Yates has picked the most Division 1 scholarship offers in the state with 22 in total from schools all around the nation such as Stanford University, Vanderbilt University, Georgia University, Auburn University, Creighton University, Baylor University, the University of Washington, the University of Texas, the University of Arkansas, Virginia Tech, Georgia Tech, Oklahoma State, Georgetown, UNLV, LSU, and countless others. Wesley Yates and the Beaumont United Timberwolves have returned this season ranked as the top team in the 5A district and they have a great chance of winning back-to-back state titles with Yates being a key piece.

K.J. Lewis 6'4" | SG Duncanville | 2023 State #20 Nation TX took home the Newcomer of the Year award as a freshman and the district MVP as a sophomore thanks to his 25 points, 5 rebounds, 4 assists, per game averages. K.J.’s elite play keeps the offers rolling in, he has so many scholarships offers that it’s hard to keep count. He recently dwindling his choices down to these 12 schools, UCLA, UTEP, SMU, Ole Miss, Texas Tech, Texas A&M, Baylor University, the University of Alabama, the University of Texas, the University of Arkansas, the University of Memphis, and the University of Houston before receiving yet another scholarship offer from Oklahoma State. Lewis displays the attributes of a high-level college-ready two-guard with athletic abilities that exceed all of his peers. A true top-shelf athlete who has the power and explosiveness to dominate on a play-to-play basis. Lewis has proven time and time again to be a pure basketball player who’s an excellent playmaker on and off the ball. It seems like everything he does on both ends of the floor is based all on his instincts. K.J. is known for attacking the glass and the rim for rebounds, physical finishes, and putback dunks in which he all delivers with force, ferocity, and amazing body control. In the open court, he’s a lethal threat due to his quickness and leaping ability. With the ball in hand, Lewis likes to get creative off the dribble while producing space and getting inside the lane. His measurements are phenomenal, 6-foot-4 frame, broad should, incredibly wide wingspan, and a gigantic hand size. There is so much to love about K.J. Lewis

Ja’Kobe Walter 6'5" | SG Mckinney | 2023 #17 Nation MO is one of those guys that’s always in the right spot at the right time on both ends of the floor. Anytime Walter steps onto the court he’s the best two-way asset out there. He loves taking jumpers off the dribble from the top of the key as well as the elbows, but any area on the right side of the floor is a hot spot for him, if Walter is allowed to get into his comfortable areas with the ball he’s almost always guaranteed to score with his lethal fadeaway, step back, or sidestep pull up jumper. Walter consistently displays a beautiful jumpshot to go along with the high arcing release that he has shown to be able to get off amongst any defender, even when shooting off-balance he looks unphased. The McKinney star has an elite ability to create off the dribble and get to his spots with a minuscule amount of dribbles. A truly masterful creator that makes every bounce he takes count for something. Walter also has a countermove for any way the defense chooses to play him. When it comes to recruitment, Ja’Kobe Walter

Ja’Kobe Walter 6'5" | SG Mckinney | 2023 #17 Nation MO already has a plethora of scholarship offers with plenty more on the way. As of now, Walter holds bids from UCLA, Ohio State, Texas Tech, Oklahoma State, the University of Florida, the University of Memphis, the University of Texas, Kansas University, and the reigning NCAA champions Baylor University, just to name a few. Walter’s McKinney Lions have a strong chance of making a deep playoff run this season, especially with Walter’s numbers that are expected to shoot up after averaging 19 points, 6 rebounds, 2 assists, and 2 steals as a sophomore. The Lions came into this season ranked as one of the top public school teams in the state and they have had no problems living up to those expectations as of yet.

As a result of Ronald Holland Ronald Holland 6'9" | PF Duncanville | 2023 TX ’s sheer dominance and sky-high potential, he continues to hold down the top-ranked spot in Texas. Not only is Ron Holland

Ron Holland 6'9" | PF Duncanville | 2023 State #11 Nation TX the best and most sought-after player in the state but he’s easily one of the best ballers in the country. The kid is a flat-out winner, all he does is win, everything he touches turns into gold. This year, in particular, has been huge for Holland, producing a State Championship for Duncanville High School, leading his Nike circuit team Drive Nation, to the Peach Jam Championship game, before following that up by winning a gold medal with Team USA at the FIBA U16 Americas Championship. Whenever you watch Ron Holland

Ron Holland 6'9" | PF Duncanville | 2023 State #11 Nation TX play you’ll notice his defensive prowess, his ultra athleticism, his unstoppable motor, his competitiveness, his all-around skillset, his run and jump abilities, his incredible body control, his leadership. and his team-first mentality, all of which helped him put up averages of 14 points, 10, boards, a block, and a steal per game all while playing on a National schedule. With a resume like that, it’s no surprise why college programs such as the University of Memphis, the University of Arkansas, the University of Houston, the University of Texas, the University of Oregon, Kansas University, TCU, SMU, Texas A&M, and Texas Tech have shown interest and sent scholarship offers. Ron Holland