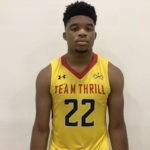 We’re heading into the month of August and believe it or not, there are still some prospects from this year’s senior class that still haven’t decided on where they’ll be attending school this fall. One of which is 2021 Mount Carmel/Team Melo center Kevin Kalu

Kalu put his name on the map with a monster senior campaign where he was named BCL Defensive Player of the Year and was a guaranteed double-double every time he took the floor. Following his shortened senior season due to COVID restricting the schedule, Kalu still wasn’t garnering much college attention. As time went on, programs who were looking for serviceable bigs began reaching out and once he took the floor with Team Melo 17U EYBL, even more programs came to the forefront.

Kalu told Prep Hoops that he will make a decision sometime next week. He’ll choosing between doing a post-grad prep year at Hargrave Military Academy, Marist and East Tennessee State.

If I had to make my guess, it would be that he’ll elect to do a post-grad prep year at Hargrave to take another year to hone in on polishing his overall skill set. Kalu fills an important role in today’s game. For Mt. Carmel, he played a similar way to Clint Capela on the Atlanta Hawks. Collecting boards by the boatload, altering any shot around the rim and rolling for vicious dunks after ball screens was where he was most effective.

Kalu has a motor unlike a lot of bigs and it translates to both ends of the floor. He’s relentless on the glass and takes pride in controlling the game in that manner. He does a good job of getting post position on the block and can reliably hit over the shoulder hook shots on his touches. Where Kalu really catches your eye is his mindset of taking down the rim anytime he has the opportunity to dunk.

His value increased dramatically once college programs saw him play on the AAU circuit. His skills are translatable to the mid-major level and one thing that Kalu does well is fill whatever role the team needs.

Getting an extra year at Hargrave to build on that skill set and develop a dependable 15-to-17 foot jumper as well as some ball skills would only help increase his stock. We’ll wait and see what Kalu ultimately decides, but you can expect a fair share of schools to get involved in the next six months if he decides to take the prep route.