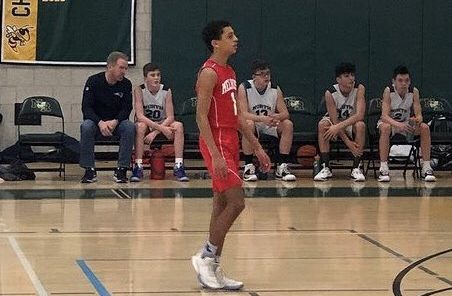 With the high school season coming to a close and spring ball heating up, I wanted to highlight some players looking to make an imprint over the next few months.

Nzui is an excellent scoring point guard whose aggressiveness going towards the basket is encouraging. He is not intimidated by rim protectors hovering in the paint and uses his athleticism to find various ways to score at the rim. He has the upper body strength and quickness to get by his defender and showed good body control when entering the paint and gathering before attempting his floaters or layups. Nzui has three-point range and can make defenses pay if they sag off of him. Not reliant on his jump shot, Nzui plays to his strengths: getting into the paint at will to create for himself or his teammates. Nzui anticipates passes well and is prone to force turnovers which turn to momentum-changing layups on the other end. His athletic 5’11” frame gives him many advantages at the point guard position with the potential to keep growing and be a potential force at the 1.

Rudnick is a ferocious slashing wing. A tremendous cutter, Rudnick will always make an effort to shake his man and look for the ball going to the basket. He loves playing above the rim and finishes aggressively and strong when he catches the ball around the basket. When receiving the ball on the wing, the 6’8” wing can get into the paint with ease, then elevate over the defense and display an automatic pull-up. Rudnick has three-point range, and he converts effortlessly when the defense closes out on him. His ability to post up smaller wings and back them down or face up before exploding to the rim adds a dimension to his game that makes Rudnick very versatile on the perimeter. His length and athleticism allow him to be a tenacious on-ball defender and one who can guard multiple positions.

Baker is a stud athlete who can impact the game on both sides of the floor at a high level. His speed and athleticism in transition are eye-popping, and he has a nonstop motor. Baker’s combination of size and speed allow him to defend out on the perimeter and in the high post. One of the hardest working players on the court, Baker will do whatever it takes to help the team win even if it does not show up on the stat sheet. He sets bone-crushing screens and rolls hard looking for the ball, wreaks havoc on the offensive glass with his toughness and jumping ability, and prides himself on being in the right positions when playing defense off the ball. With the physical tools to be a two-way monster on the hardwood, Baker is a player who is looking to continue to develop his skillset and take his game to the next level this spring.

Bernstein is developing into a dynamic two-way big man. An excellent rim protector, Bernstein never shies away from challenging shot attempts in the lane. What is encouraging about the 6’10” center is that after he contests a shot and secures the rebound, he will rim run hard looking for the ball to make an aggressive move on the offensive end. Even if he does not receive the ball in transition, being a massive target in the open court draws so much attention from the defense that his activity opens up shooting opportunities for the perimeter players. The most underrated part of Bernstein is his hands. He is a reliable inside presence who catches everything. He shows good touch around the basket and in the mid-range. Relentless on the glass, Bernstein always crashes on both ends of the floor, looking to secure possessions. Coaches have raved about his work ethic and how he is one of the most hardworking players on and off the court.  So this spring, we should expect Bernstein to continue developing and dominating on the hardwood.