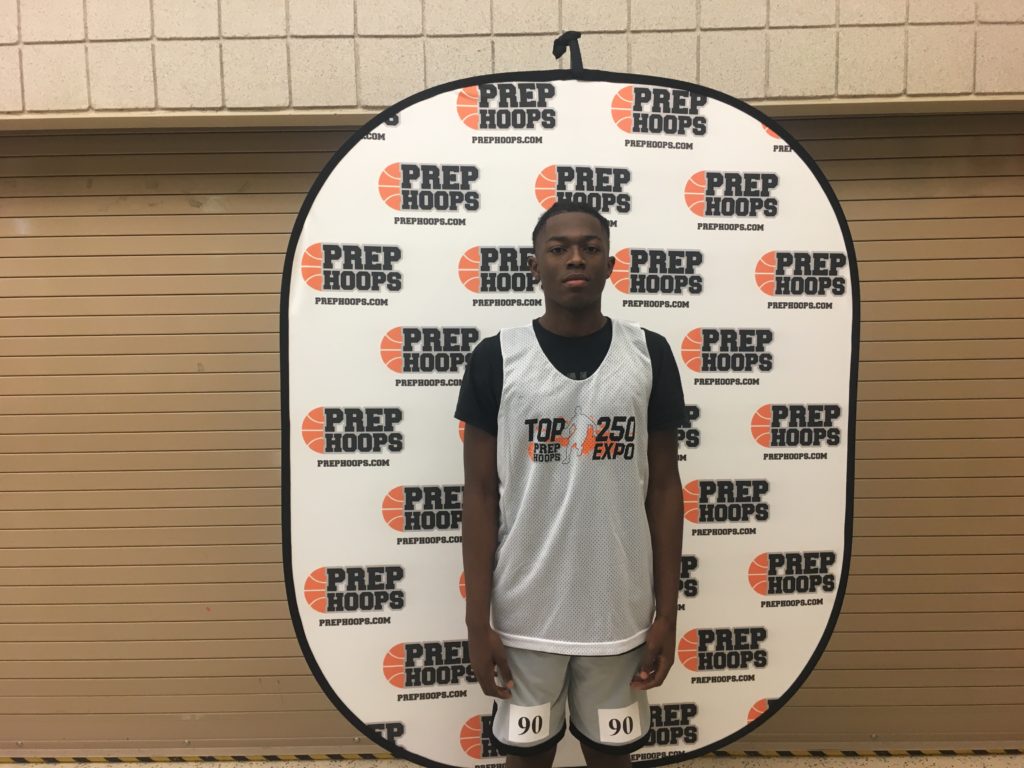 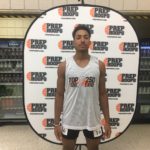 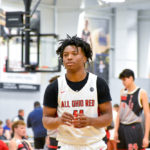 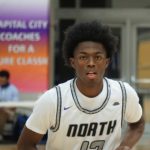 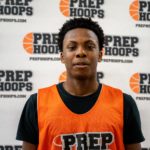 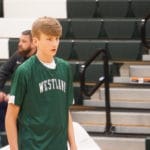 The conference realignment shook up what was the most talented division in the state last season, but this division of the OCC still could yield the most talented team in the state, along with a legit state player of the year candidate. The Gahanna Lions (24-2) finished what up to that point was a one-loss season with a loss to the Walnut Ridge Scots in the Division 1 District Finals by a score of 48-52. That may just fuel them into this season, who brings back a majority of its talent and this much talent just does not get deterred without a pandemic happening around it. Once these teams can begin to play again, look for the Lions to have a big time say-so in the state playoffs. Elsewhere, Pickerington North (21-5), the only other team to beat Gahanna, returns a host of its players and is trying to once again knock off the Lions and not just be the runaway second place finisher. The addition of New Albany (16-8) and Westerville Central (18-7)

The conference realignment shook up what was the most talented division in the state last season, but this division of the OCC still could yield the most talented team in the state, along with a legit state player of the year candidate. The Gahanna Lions (24-2) finished what up to that point was a one-loss season with a loss to the Walnut Ridge Scots in the Division 1 District Finals by a score of 48-52. That may just fuel them into this season, who brings back a majority of its talent and this much talent just does not get deterred without a pandemic happening around it. Once these teams can begin to play again, look for the Lions to have a big time say-so in the state playoffs. Elsewhere, Pickerington North (21-5), the only other team to beat Gahanna, returns a host of its players and is trying to once again knock off the Lions and not just be the runaway second place finisher. The addition of New Albany (16-8) and Westerville Central (18-7) bring new exciting and different challenges for every team in this division while Westland (3-20) looks to hang around and pull off some upsets in their debut season in the Ohio Division. Toss in Grove City (12-12) and fans can expect the competitive  of this division to stay the same. These are the players to watch from this division whenever this upcoming season begins for everyone.  Sean Jones

Sean Jones 5'10" | PG Gahanna | 2022 State #102 Nation OH - 2022; Gahanna Lincoln: The best player not only in the entire Ohio Capital Conference, but one of the best in the state, Jones looks to lead a revenge-filled Lions team to their ultimate destination. After being injured most of this summer, he looks to be rejuvenated and he definitely has an extra leap in his bounce. Jones is known for his style and swag on the court, along with making defenders look foolish with his dribbling ability and passing skill but he can also hurt teams with his shooting and ability to attack the basket. Jones is a menace of defense, playing passing lanes like a seasoned vet and harasses  ball handlers with his low stance and quick hands. The 2019-2020 OCC Player of the Year, first team all-everything will continue to dazzle scouts and college coaches alike this season as he looks to conquer the state of Ohio’s high school basketball playoffs.  Jerry Saunders

Jerry Saunders 6'0" | SG Pickerington North | 2022 State OH - 2022; Pickerington North: Talking with one of Saunders’ trainers Cordaryl Ballard, Saunders has added some essential parts to his game that will transform him into a totally different player. This young man comes into this as one of the better shooters in the division and the conference as a whole, his jump shot remains pure and the best part of his game. Playing some of the fall in the Columbus born B.R.I.C.K League, Saunders has gotten better driving through contact and using his body to control to get shots to fall at the rim. This young man has the potential to be a 20 point per game scorer this season as the leader of his team. Saunders has become more vocal on the floor, finding his voice over this summer/fall season while adapting to taking over the game when it is called upon for him to do so. His game is great and by all accounts Jerry is just as great of a young man, quiet yet outgoing and he is said to always be the hardest worker in the gym.  Tasos Cook

Tasos Cook 6'2" | SG Westerville Central | 2021 State OH - 2021; Westerville Central: The Heildelberg commit had an extraordinary season last year and followed it up with a great summer which led to his offer and subsequent acceptance from the Student Princes. Cook finished the season scoring with close to 17 points per game. The athleticism this young man displays is off the charts, frequently dunking on opponents. Cook can also absorb contact on his way to the basket without it deterring his shot. His mid-range touch is tremendous, getting into the lane at will and using his jumping ability to get his shot off over the arms of defenders. Although he already know where he is attended college, he is one of the more fun players to watch.  Corey Hudson- 2022; Pickerington North: What Hudson lacks in athleticism, he more than makes up for with raw strength, power and a high basketball IQ. Just watching him operate gives spectators chess playing vibes because of the way he thinks through the game. Hudson uses the pick-and-roll effectively, picking apart defenses with their inability to stop him from getting to the rim and his solid passing. This kid doesn’t get sped up, staying at his own pace and punishing solo defenders with his relentless attack of the basket. He can also play off the ball to become a three-point threat when left open. Hudson’s style of play is one coaches love and he should be on the radar of schools around the country.  Alex Coffey- 2021; Grove City: A tough-minded young man who will not be denied from the rim. Coffey lives in the paint, with a nice first step and a soft touch at the rim. He matches his inside game with his perimeter game, frequently hitting jumpers from deep to make sure teams cannot pack the paint against him. His close to 12 point average last season will more than likely rise because of how he always attacks the basket. Defensively, Coffey takes the same approach with aggressive defense and taking chances with steals. The senior hopes to scrap and claw his way to help the team win.  Jarius Jones 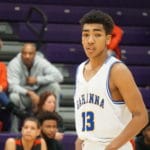 Jarius Jones 6'5" | SF Gahanna | 2021 State OH - 2021; Gahanna Lincoln: Once you glance away from Mr. Jones (and if you can stop being mesmerized from all the Lion talent) then turn your attention to this young man is very talented. He plays with an adult-like poise on the court, either calmly running the offense himself or making himself available for the ball handler. Jarius is big enough, 6-foot-5, to play shooting guard but can also make plays and run the point for teams as well. A pitbull of a defender, this young man gets after it, by being able to close out on shooters then go soar and snatch a rebound. Much like the rest of Gahanna, this Jones will be look for redemption and a state title but only time will tell if that can happen.  Sohn McGee

Sohn McGee 6'4" | SG Central Crossing | 2022 OH - 2022; Westland: The do-it-all guard is an all-around solid basketball player with little holes in his game. McGee plays with pace, employing stop/start dribble effectively and slithering to the rim with his gangly frame. After a solid summer/fall, he looks to increase his scoring from a tick below 7 per game to become a double-digit scorer. On defense, McGee is tough and willing to get his hands dirty and stick it in passing lanes. He also showed good anticipation and off-ball instincts by having a number of blocks coming from the weak side of the court. As a junior, this should be the breakout season for McGee as he has all the tools to be a star.  Landon Tillman Landon Tillman 5'10" | PG Westerville Central | 2022 OH - 2021; Westerville Central: A small, smart guard with the ability to lead a team and take over games when it is needed. The ultra tough son of a coach shows great IQ and poise on the court with the knowledge of when he needs to be aggressive for himself and when he needs to get his team involved. Tillman is not afraid to drive the ball and get hit a couple times, his quick first step allows him to get to the rim almost at will and when he gets there he is able to pass or get the ball over taller players. His range has never been in question, Tillman has displayed how deep he can shoot along with his quick release which lets him shoot over the majority of defenders. Tillman had a solid summer and looks to carry his momentum into this season, whenever it starts. Brock Waits Brock Waits 5'11" | PG Grove City | 2021 State OH -2021; Grove City: The 6 foot guard showed as junior that he could be the best player on his team, averaging just over 19 points per game with a 41-point performance in there, and this season looks to be no different. Waits is a knockdown shooter with in-gym range, a quick release and the ability to create space consistently.  He has good eyes and quick hands on defense that allow him get steals in a myriad of ways. Waits can also handle the ball better than you may think, using his shifty and slick handle to get to the basket where he is a very good finisher. The tough guard always keeps his team competitive but this season he looks move the needle from competitive loses to wins. Drew Panning

Drew Panning 6'6" | SF Westland | 2022 OH - 2022; Westland: This 6-foot-7 stretch forward has a jumper that it is “hotter than fire and hurts defenses worse than pain,” paraphrasing the great Lil’ Wayne. The curly blonde haired Panning can initiate offense when he is needed because of his above average dribbling skills. Seeing over the defense allows him to make good passes to cutters or other open shooters as he commands so much eye distraction. In isolation situations, Panning can create space from distance to get shot off or he can drive past defenders with a nice and long first step that is tough to defend. Although he is not the strongest player, he grabs tough rebounds and contests shots the rim on a consistent basis. A prospect worth keeping an eye on because he does everything well.      *All statistics according to 270hoops.com*