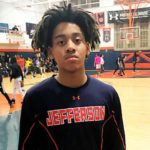 After an active morning and midday set, Lucky City transfers to the evening slate of games, where the talent level hasn’t faltered a bit. Players had some rust but they relished the opportunity to play just like they normally would. Here, we take a look at some of the top players from the evening set of games.

Andrew Liang relished the opportunity to have exposure, and he made sure he preformed well. Liang put up 23 points to lead his team in scoring, doing a little bit of everything. Liang was tenacious on defense, a threat from deep, versatile all over the floor, and able to consistently be in the right place under the rim to take advantage of the score.

Forming a dynamic duo with Liang, Jazan Johnson and his efforts definitely pushed Spartan Pride to completely double up against Team Avaiation. Johnson, much like Liang, was active from all over the court. Johnson was consistently a threat from deep, and used that to create open lanes for himself to the hoop.

Jaquan Carlos 5'11" | PG Jefferson | 2021 State #180 Nation NY is arguably the best point guard in the state, and today he proved just that. Carlos has lit up the stat sheet in just about every way possible. He shot over 50% and with a high volume as well from the three point range, and you bet he did that off his dribble. His interior penetration looked as strong as ever, and he is officially a triple-double threat with him being able to grab boards and dish smart passes to the right players.

Jaquan Carlos 5'11" | PG Jefferson | 2021 State #180 Nation NY on your team, you would need great finishers to let Carlos reach his potential. Here, that is exactly what Dontae Prescott is. Prescott could space the floor and provide distance for Carlos, while once he has the ball, you can be sure his eyes are directly to the basket.

The Orange Men won the game against Brentwood, but it seems it was Jordan Riley Jordan Riley 6'3" | SG Brentwood | 2021 #104 Nation NY who kept it close. Riley dropped 32 in an effort to keep Brentwood n the game, and his performance might have very well put him on watch lists of colleges everywhere. Riley proved relentless in driving to the rim, and he was able to get either a clean look of the basket or an easy trip to the line.