Prep Hoops Missouri takes a look at the Class 2 state quarterfinals, which will be held on Saturday around the state. The games will tip-off at 2:45 p.m. except for the Greenwood-Hartville game, which begins at 3:30 p.m. The winners will advance to the Final Four of the state tournament on March 13-14 at the JQH Arena in Springfield on the campus of Missouri State University.

Thayer (23-5) vs. Oran (25-5) at Sikeston: Oran is looking for another trip to the Final Four after a runner-up finish last season while Thayer is hoping to complete the trip after a big run of district championships. Oran edged Brentwood in the sectionals behind 21 points from 2020 guard Tyson Goodale. Thayer is small, but they are tough and well coached with 2021 guard Jayce Haven and 2020s Jordan Andrews and Gaige Pitts leading the way. Haven scored 16 points in a victory over Bernie in the sectionals. (Prediction: Oran)

Skyline (28-2) vs. Mid-Buchanan (22-7) at Liberty North: Both of these two teams had their seasons ended by Plattsburg last year in the state playoffs. This time, one of them will get to go to the Final Four. Mid-Buchanan has made winning a habit for years now and they are back with versatile 6’4″ 2021 Chistian Scaggs, 2020 guard Miguel Canchola and 2021 point guard Jared Noyer. Skyline has put together back to back big seasons, including a victories of Lakeland and Crest Ridge. All-State 2020 guard Dax Beem is a big catalyst  while Lawson Beem, Jaytin DeFreece and Bradyn Porter offer excellent support. (Prediction: Skyline)

Milan (24-3) vs. Eugene (20-6) at Moberly Area Community College: After seeing their season ended by Van-Far in the playoffs the past two seasons, Milan broke through with a 17-point victory over their nemesis in the sectionals. They have a strong front court punch in 6’5″ 2020 Ryan Dabney Ryan Dabney 6'5" | PF Milan | 2020 State MO and 6’4″ 2020 athlete Hunter Shaw Hunter Shaw 6'4" | SF Milan | 2020 State MO . They keep the pressure on with their team athleticism. Eugene survived an overtime thriller over New Franklin to get to the Elite Eight. They feature one of the top all-around players in Class 2 in 6’4″ 2020 Tre Kempker Tre Kempker 6'3" | SG Eugene | 2020 State MO , who is capable of playing every position for his team. (Prediction: Milan)

Hartville (28-2) vs. Greenwood (26-3) at Republic: This is a battle of the top two remaining teams in the field. They met in a classic state tournament game last year with Greenwood winning by two points en route to winning the state title. Star 2021 guard Aminu Mohammed Aminu Mohammed 6'5" | SG Springfield Greenwood | 2021 State #19 Nation MO is leading the way for Greenwood, but he is getting help from the likes of 2021 point guard Grant Harper, 2022 shooter Tommy Pinegar and 2023 forward Kaden Stuckey, Jr. Hartville has continued its great tradition with another big season and they will rely on young veterans such as 2021 guard Recko Bailey Recko Bailey 5'10" | PG Vashon | 2021 State MO , 2021 forward Preston Fortner 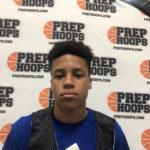 Preston Fortner 5'10" | PG Francis Howell | 2021 State MO and fellow classmates Cody Mahan and Braden Branstetter. It should be a great one. (Prediction: Greenwood)