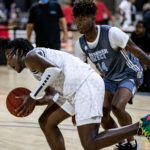 A skilled 6-7 combo forward with the ability to score inside and out, Johnson averaged 12.6 points and 6.8 rebounds a game with 58-50-67 shooting splits as a senior. He handles the ball fairly well, has a good feel for the game and has a great perimeter stroke that he will use much more often as he transitions to the next level. He’s headed to play Division II ball at Missouri S&T.

One of the best pure shooters in the state, Miller made 86 3-pointers this season after burying 101 last year. Despite facing constant junk defenses, he led 2A in scoring, putting up 26.2 points a game. He handles the ball really well, is a great passer and has a lightning quick release both off the dribble and the catch. He’ll play Division II ball at Truman State for former Hawkeye Jeff Horner.

The 6-7 big man was absolutely dominant as a senior for the Dutchmen, shooting 87.7% from the floor. He put together one of the strongest summers of any player in the state last year, and followed it up with a fantastic senior season, firmly establishing himself as one of the best players in the 2020 class. He’s headed to Northwestern College.

The 6-3 combo guard is a knockdown shooter who moves extremely well off the ball and has a smooth, repeatable release with extended range. He’s got great length and can defend either perimeter spot, while also handling the ball on the offensive end of the floor. He’s a winner who will join Masen Miller Masen Miller 6'0" | PG Regina | 2020 State IA at Truman State.

A talented 6-5 playmaking wing, Keegan has great length and the ability to impact the game on both ends of the floor. A solid athlete who handles it and passes it really well, he can dominate a game without scoring. But he’s also a strong scoring threat as well, averaging over 19 points a game while shooting 57% from the floor and 44% from 3.

A fantastic athlete with the ability to score from all three levels, Christian is a 6-3 scoring wing who can fill it up in a hurry. He’s a big, physical wing who has the tools to be a good defender, and a great scorer. He has steadily improved his perimeter stroke and is a viable threat from 3, but is at his best when he’s playing downhill and using his strength and athleticism to finish at the rim.

A supremely athletic 6-5 forward, Peeters became Assumption’s all-time leading scorer this season. Able to score at a high level with either hand on the block, he has great footwork and touch around the rim, and an explosive first step that he uses to take slower-footed defenders off the dribble to score as well. He’s a really good rebounder with soft hands, and he can impact the game in a variety of ways.

A 6-0 lead guard who handles it well, Auer is one of the best pure shooters in the state, regardless of class. He’s not an elite athlete, but he’s quick enough, and he does a good job changing speeds and has a good burst that he uses to get to the rim when he’s not lighting teams up from the arc. A high IQ guard who does a good job protecting the ball, he led Valley in both scoring and assists as a senior, while knocking down 72 3-pointers.

Delzell is one of the more uniquely talented players in the class. He grew up playing point guard, then had a growth spurt that shot him up to about 6-8. He has kept a majority of his lead guard skills, and now has the frame to go with those skills that make him a really intriguing prospect. He has a good feel for the game, passes and handles it well, and has a solid perimeter stroke.

One of the best pure shooters in this 2020 class, Huff is a 6-1 shooting guard with a good frame and a lightning quick release on his picturesque jumper. He has extended range and is capable of catching fire in a hurry. Equally adept shooting off the dribble or the catch, he will thrive at the next level when opposing game plans can’t solely focus on him.