After putting together a sensational senior season, including leading Ankeny to the 4A state title, Bayless makes the leap up into the top five in the final 2020 rankings. A tough, physical lead guard who changes speeds well and can score effectively from all three levels, he’s at his best when he’s playing downhill and attacking the rim. He’s exploring JuCo and prep school options, but after another year or two of seasoning and refining his game, he’ll be a coveted Division I lead guard prospect.

A supremely athletic 6-5 forward, Peeters became Assumption’s all-time leading scorer this season. Able to score at a high level with either hand on the block, he has great footwork and touch around the rim, and an explosive first step that he uses to take slower-footed defenders off the dribble to score as well. He’s a really good rebounder with soft hands, and he can impact the game in a variety of ways.

A 6-0 lead guard who handles it well, Auer is one of the best pure shooters in the state, regardless of class. He’s not an elite athlete, but he’s quick enough, and he does a good job changing speeds and has a good burst that he uses to get to the rim when he’s not lighting teams up from the arc. A high IQ guard who does a good job protecting the ball, he led Valley in both scoring and assists as a senior, while knocking down 72 3-pointers.

Like Auer, Huff is one of the best pure shooters in the state. He has a quick release both off the dribble and the catch, and extended range. He has really developed his ball handling and all-around scoring ability, but it’s his shooting that will make him a valuable player at the next level. He was tasked with carrying the scoring load for the Dons, and constantly saw junk defenses thrown at him. He still put up 23 points on 48-41-88 shooting splits. Put him on a college team where he can stand in the corner and get open looks from 3 all night, and watch out.

No player made a bigger leap than Indianola’s point guard, who led 4A in both assists and steals. His 174 assists were 52 more than any other player in 4A had, and his 76 steals were 16 more than the next closest player. The 6-0 lead guard also led the Indians in scoring. He plays under control, has an excellent feel for the game, and is highly efficient.

The other key piece in Indianola’s backcourt, Johnson is a long, 6-3 wing who is a knockdown shooter from 3. He moves well off the ball, and shoots it really well off the dribble and the catch. He buried 76 3-pointers on the year at a 41.5% clip.

A 6-0 lead guard with a smooth pull-up game, Schmitt has really enjoyed the fruits of a recent growth spurt that have allowed him to continue moving up the rankings. He handles the ball really well, is a good passer and has an excellent mid-range game, especially off the dribble. He stops on a dime and elevates into his jumper before the defender knows what hit them. In addition to his strong offensive game, he’s a great on-ball perimeter defender with great lateral movement and quick hands.

A big, 6-9 lefty, Van Gorp was a force on both ends of the floor for the Eagles this season. He shot just under 70% from the floor and averaged over 10 rebounds a game in addition to his 15 points. As he continues to add strength and range to his game, he’ll be a great collegiate player at Central.

The 6-4 wing is just a walking bucket getter. He’s capable of filling it up from anywhere, and when he gets it going, he’s really tough to slow down. He’s a big bodied wing who can post up smaller defenders, is quick enough to take bigger defenders off the dribble, and has a solid perimeter stroke.

A 6-7 do-it-all forward, Hurd led his team in scoring, rebounding, assists, steals and blocks this season. He’s capable of scoring from anywhere, and is a good, willing passer, with great size. 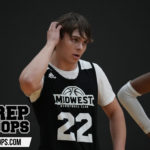 Miller is an undersized power forward at just 6-2, but he plays much bigger than his listed size, and is a phenomenal rebounder who does a great job boxing out, getting great position and using his soft hands to corral every rebound in his area. He runs the floor well, has a silky jumper and has really improved as an all-around scoring threat. Despite being named our 2A Player of the Year, Miller won’t play basketball at the next level. Instead, he’ll attend Iowa State and focus on his school work.

A playmaking forward that the Stormin’ Pointers were able to play through on the offensive end, Tupa is long and a great passer. He has the ability to score from all three levels, but is at his best when he’s posting up smaller defenders and either scoring or finding open shooters on the opposite wing.