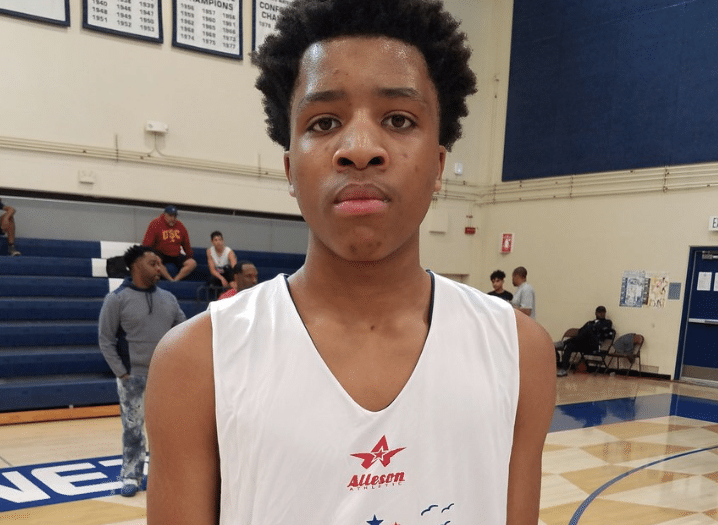 The AAU season is coming to a close, and this past weekend, Prep Hoops hosted the Hustle Region Finals at the Momentous Sports Center in Irvine, CA. There was a lot of great talent on display from all over the country throughout the weekend.

I was able to attend the event this past Sunday on the final day of the event. While there was plenty of talent from different states, I focused mainly on the more local Southern California players. Here’s a look at some of the top SoCal standouts that I saw.

Bowden is another flat out scorer. He’s a big, tough guard who is great at getting to the rim. Out of all the players at the event, he may have had the biggest weekend showing off his scoring prowess. He’s very tough to stop when he’s attacking the rim. He can draw contact and get himself to the free-throw line. Quick first step and solid crossover. He can find his teammates too and take advantage of the defense he draws due to his scoring.

Hlywiak is a shooter in every sense of the word, a true long-range marksman. He’s got a very quick release from three which makes it tough on defenders to scramble back to him if he’s open. He’s a real lights out shooter with unlimited range. He can even shoot threes while being covered by a defender. His game isn’t one dimensional, however, he can put the ball on the floor and make plays too. A great hustle player always diving after loose balls.

Ceballos is a very good energy player who always looks to make the right play. He’s a leader on the court and does all the little things that don’t necessarily show up in a box score, all the little hustle plays that contribute to winning basketball. He can score when he needs to, he can attack the rim and he can shoot from the midrange. He plays defense too and crashes the boards. He’s in the mold of a big guard who plays tough.

Lloyd recently transferred from Calabasas to Taft, and he already holds a few Division 1 offers. He’s a matchup nightmare for opposing players. He can play multiple positions both offensively and defensively. He’s got great court vision and he runs the floor well either as the ball-handler or filling the lanes to catch a pass. He’s a solid playmaker who finds his teammates for easy baskets. On the defensive end, he uses his length to contest shots well.

Shtolzberg is another top guard in a nice collection of young talent put together by The Truth EYBL 15U team. He has a nice scoring touch. He can shoot from both the midrange and from the three-point line. He can also attack the rim and finish the play or draw contact and get himself to the free-throw line. As a playmaker, he’s good in transition. Solid outlet passer to get the fast break started.