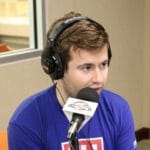 Rogers wing Steffan Musoke has the physical tools.  He’s got athleticism and the right physique plus the skill set is growing. This winter, Steffan took a strong step forward with the Minnesota Fury.

“This year helped my game mentally,” Steffan stated.  “I became more consistent when it came to preparation and game time.  My last year of (Grassroots basketball) was awesome.

“I met a ton of new guys in a new program, received a lot of exposure, and really enjoyed it overall.”

The Fury was 41-9 and Steffan was a key part to their success. Next, Musoke wants to have a memorable year with the Rogers Royals.

Musoke is leading returning scorer for the Royals at 13 points per game and he will be joined by Williams Alexander, and Allen Wilson to form an athletic core.

“I’m very excited,” Steffan said about this winter.  “Our squad will be pretty young, but we have a lot of talent.

“We should be a top team in our conference this year.  I see us as a team to beat in our section, and to do that we just need to play unselfish and hungry and we will accomplish that.”

“I just talked to Azusa Pacific University the other day as well.  So far I have plans to officially visit at Northern State, Minnesota-Duluth, and Minnesota State-Moorhead.”